George Beccaloni caught reviewing a book he never even read

Dr George Beccaloni, curator of the Wallace Collection at the Natural History Museum, London, is very active on the internet in trying to downplay the significance of the New Data in the story of  the discovery of natural selection.

I suspect the reason for his behaviour is because of the discovery that Selby - who was Wallace's Sarawak paper editor - had earlier cited Matthew's (1831) book, containing the full and original conception of macro evolution by natural selection. And yet - like Darwin, whose friends and influencers also read and cited Matthew's book before he wrote a word on natural selection - Wallace claimed to be an independent discoverer of Matthew's prior published conception. Now, in addition to the circumstantial evidence that Wallace was 'knowledge contaminated' via Selby by Matthew's work before he published on it, Wallace is also proven to be dishonest.

Because he is proven dishonest, nothing Wallace wrote about his supposedly immaculate conception of Matthew's prior-published work, should now be taken at face value. Wallace is proven to have been dishonest by way of my original discovery that he doctored the transcription of one of his personal letters in his autobiography to conceal the fact he thought he was owed money and favours by Darwin, Lyell and Hooker for the role they played in deceiving the Linnean Society into believing he had consented to their reading of his paper with, and after, Darwin's on natural selection. The frequently broke Wallace did indeed receive plenty of money and favours with their assistance thereafter. 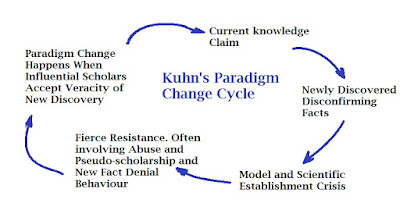 A picture speaks more than a thousand words when it is a screenshot of what he gets up to online. Judge him for yourselves. See how my publisher Bob Butler confronts Beccaloni with the fact he has not even read my book: "Nullius in Verba: Darwin's greatest secret", which contains the very uncomfortable "New Data" on both Darwin and Wallace. And yet Beccaloni posted his faux review of my book in several places on the Internet in an observable and independently verifiable desperate knee-jerk pseudo scholarly attempt at de-facto fact-denial of the facts he had not even looked at! Such palpably deliberately biased and essentially dishonestly misleading behaviour is outrageous from a salaried scientist.  Beccalloin's apparent pride in this unethical behaviour, and further dishonesty, is established by the many comments of his to that effect in the comments section to this blog post.

Bob Butler How do you know "wrongly accused", I was able to determine you haven't bought the book yet. The newly revealed research is fairly compelling and convincing. Surely even a Darwinist will look at research before declaring it wrong.

George Beccaloni I know for a fact that there is no 'hard evidence' that any of the people who supposedly read Matthew's book passed on Matthew's ideas about 'natural selection' to Darwin or Wallace. If there was such evidence it would be newsworthy!

Bob Butler BTW, it looks like the reviewer on the The Alfred Russel Wallace Website hasn't read the book either and is just restating the old arguments... you know the same logic Watson and Crick used to defend their refusal to acknowledge Rosalind Franklin's discovery of DNA's double helix.

Beccaloni's knee-jerk dismissal of the original and significant findings in my book, which are the first to completely refute the myth started by a lie told by Darwin and parroted ever since by what Dr Arlin Dr Arlin Stoltzfus , of the University of Maryland, Institute for Bioscience and Biotechnology Research, poignantly refers to as "the zombie hoard" of  Darwin worshipping - myth parroting myna birds - that no naturalist known to Darwin or Wallace read Matthew's prior published conception of macro evolution by natural selection before they replicated it and claimed it as their own dual independent conceptions, was made when Beccaloni had no idea whatsoever (because he had not read my book) who it was who read Matthew's book pre-1858, and that they then influenced Darwin and Wallace and their influencers and their influencer's influencers before either of those two mere replicators penned a single word on the topic.

Becalloni's behaviour is not dissimilar to Professor James Moore's incredible claim as reported in the Daily Telegraph national newspaper  (incredible because Moore is a self-proclaimed expert on this topic) that "I would be extremely surprised if there was any new evidence had not been already seen and interpreted in the opposite way.”

Personally, I am extremely surprised that Professor James Moore claims to be unaware that the nationally newsworthy discovery that  as opposed to the old Darwinite "knowledge belief" of none whatsoever that naturalists in fact have been originally and newly discovered by me in 2104 to have read and then cited  Matthew's book pre 1858. Because that discovery is completely new - 100 per cent verifiable by way of the publication record (so this is something we can now 100 per cent know, because it is so absolutely hard-evidenced) and therefore has never been discussed before and, therefore cannot possibly be interpreted in the opposite direction. And the originality of my findings are verified as new and original in two subsequently expert  peer reviewed journal articles here and here.

The de-facto fact denial behaviour of Beccaloni and Moore was then replicated by John van Wyhe of the University of Singapore who similarly misinformed the Scottish press by a personal press statement email to the Journalist Michael Alexander (sent on to me for information) about his opinions of my original peer reviewed newly published  research (Sutton 2016), in a peer reviewed journal - from whose advisory board he resigned in the immediate wake of my publication in it:

"Dr Sutton's allegations about a purported influence of Matthew on Darwin and Wallace are not new.

This conspiracy theory is so silly and based on such forced and contorted imitations of historical method that no qualified historian could take it seriously."

Van Whyhe's claims were later diluted by Alexander in the press to read:

'Dr John van Wyhe, a senior lecturer at the Department of Biological Sciences, at the National University of Singapore, said the recent claims by Dr Mike Sutton of Nottingham Trent University were “so silly” and “based on such forced and contorted imitations of historical method that no qualified historian could take it seriously. “ '

Perhaps by way of the same arguably jealous logic, Dr van Wyhe similarly believes the Staffordshire Hoard is a conspiracy theory because it was discovered by a non-historian with a metal detector?

The behaviour of these three professional Darwinites certainly confirms the Dysology Hypothesis and is worthy of further research by psychologists and sociologists interested in how uncomfortable newly discovered significant facts, which lead to paradigm changing new discoveries, face a biased reception by those with a professional new fact denial agenda.

My college, a chartered psychologist, Professor Mark Griffiths, is particularly interested in this specific pseudo scholarly behaviour and is ready and willing to talk with biased Darwinists about that behaviour and their new fact denial beliefs. Here.


Most fittingly, Dr George Beccaloni provides us with confirmatory evidence for the extremely simple concept of knowledge contamination: