The Botanist Robert Hogg: On his currently known associations with Matthew and Darwin 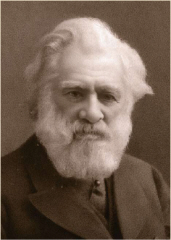 I discovered some interesting new information about the botanist Robert Hog   g and his associations with Matthew's orchards, Matthew's son Robert and later (post-1859) with Charles Darwin.
Hogg was a leading expert on apples and apple trees. Click here    to see a sample of his important publications.
I have as yet found no evidence to suggest that Darwin met or corresponded with Robert Hogg before Darwin had published his Origin of Species (the book that replicated Matthew's prior-published hypothesis - but never cited Matthew). However, information provided by Hogg is most important for purposes of verifying other examples of botanical and agricultural importance of particular trees in Matthew's orchards in the 19th century.
In 1859    Hogg wrote about Matthew's son Robert providing him with valuable advice on apple trees. Then in 1884 Hogg wrote    about an earlier visit to Matthew's orchard in 1846 and that he was shown an important fruit producing shoot one of the rare trees within it.

Is it a mere coincidence that Dariwin's notebook of books to read had in it a reference to the journal that contained a lengthy correspondence by Matthew (1829) on the subject of Matthew's apple hybridization expertise, in which Matthew wrote of his own famously unique scarlet golden pippin apple tree - most importantly grown from a pip and not a mutant fruiting branch graft onto old crab-apple tree stock - as is the usual necessity to maintain any new hybridized or 'ramifying' variety of apple fruit?
Is it then also mere-coincidence that Darwin's Zoonomia notebook - dated by Darwin 1837-38 - began on the very subject of fruit trees and had in it the famous phrase that Darwin's son, Francis, saw as the first clue that Darwin had begun then to first understand the role of mutation by natural selection in the generation of new varieties and species of all organic life?
Darwin wrote 'They die; without they change; like Golden Pippens. It is a generation of species. Like generation of individuals.'

Thinker Media IncUsed only with express written permission
Nullius in Verba
Matthew was an expert on apple trees - he owned one of the best orchards in Scotland and had a published and cited international reputation as a hybridization expert and agriculturalist. He was even listed by Loudon as a botanist. Darwin was no expert on the topic of trees. Darwin even misspelled Pippins as "Pippens" and later made a simple mistake regarding what species of crab apple tree he owned. This topic - and the role of crab-apple trees- in helping Mathew and then Darwin understand the natural process of selection is discussed in-depth in my book:Nullius in Verba: Darwin''s Greatest Secret.
As said, it is not known whether Darwin associated with Hogg before Darwin published the Origin of Species (I have found nothing to suggest they met or corresponded before 1859) , but they did meet a decade after - in 1869 (here   ) to discuss a strange tree- that may have been either an apple or a pear. And post-Origin Darwin published article   s in Hogg's journal 'The Cottage Gardener' (later re-named The Journal of Horticulture).
Like Darwin (FLS), Hogg (FLS) - a Scot - studied medicine at Edinburgh. Like Darwin, he was also a member of the Linnean Society (Hogg from at least 185   3). Darwin's best friend and collaborator in the 1858 Linnean debacle - where Wallace's and Darwin's papers were read together without Wallace's consent, Joseph Hooker (FLS), was elected in 1854   . Darwin was elected to the Council of the Linnean society in 1858.    Darwin's other great friend and geological mentor Lyell (FLS) - another Scot - was elected to the Linnean society in 1819   .
Hogg was also an early Secretary    of the Royal Horticultural Society.
According to a local historic society   , Hogg had a background that reveals to us his interests were not dissimilar to Matthew's involvement with forestry, and also their respective wider family connections with nursery work:

Robert Hogg (1818 - 1897), Farmer, Fireburnmill Farm, Coldstream, was the son of Robert Hogg of the firm of Hogg & Wood of Coldstream, suppliers of forest trees and agricultural seeds. Hogg was educated at a private school in Duns and Edinburgh University. In 1836 he worked in the nursery of John Ronalds, London, and after traviling and studying in Europe he bought Brompton Nursery ( on the site of the Victoria and Albert Museum), renaming it Gray, Adams and Hogg. Hogg was the General Secretary for the International Horticultural Congress, 1866 and represented the Royal Horticultural Society at the International Exhibition, St Petersburg. He was Secretary to the RHS 1875 - 1884. He had many publications on Horticulture and Fruit.

Further research into Hogg's role in the story of Matthew, Wallace and Darwin is on-going.

Hogg, R. (1859) The apple and its varieties being a history and description of the varieties of apples cultivated in the gardens and orchards of Great Britain. London. Groombridge and sons.
Hogg, R, (1884) The fruit manual : a guide to the fruits and fruit trees of Great Britain.London : Journal of Horticulture Office,
Posted by Dysology at 05:32