Darwin's Proven Plagiary at the Top of Google Hits 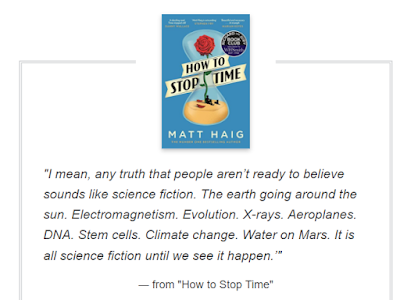 Posted by Dysology at 00:47 No comments:


Why is it so difficult for us to change our minds when presented with new evidence? https://t.co/p6YRpupXX2

Yes @hedgefundinvest @hedgfundmanager it's because we are not hedge fund managers. They can teach scientists how to keep their minds open to disconfirming evidence for prior knowledge beliefs - Why? Because it's their job. Otherwise they would fail https://t.co/R3oTyZalfe https://t.co/i1s7XSn4qI

Posted by Dysology at 11:30 No comments:

Posted by Dysology at 02:31 No comments:

Email ThisBlogThis!Share to TwitterShare to FacebookShare to Pinterest
Labels: On Science

For the historical record: further weird abuse from another professor of biology

Charles Darwin was born on Feb. 12, 1809. He irrevocably altered our understanding of life and our place in the universe. pic.twitter.com/4cx7z6HKOg
— god Free World (@godFreeWorld) February 12, 2018

The only crime is a mediocre criminologist seeking glory through sensational headlines about how he ‘discovered’, in well-known history, a crime for which he has no evidence.
— god Free World (@godFreeWorld) February 13, 2018

We weren’t having a debate. You’ve just promoting yourself using the unjustified claims you’ve made - no doubt drawn to my follower count. When your glory-seeking failed you proceeded to troll me, as you continue to do. Happily, there’s a button for such people.
— god Free World (@godFreeWorld) February 14, 2018

With further hilarity, name calling again? Hmm. I have the help of a top psychologist. Check him out on the back cover of the book that you have no doubt I need his help with. Will you "no doubt" have no doubt he has nothing of interest to say on fact denial Darwin fanatics? pic.twitter.com/3stg9FMTf7
— Dr Mike Sutton (@Criminotweet) February 14, 2018

+
Other examples of related New Data messenger shooting abuse can be found here
Posted by Dysology at 12:09 No comments:

Email ThisBlogThis!Share to TwitterShare to FacebookShare to Pinterest
Labels: abuse

Charles Darwin was born on Feb. 12, 1809. He irrevocably altered our understanding of life and our place in the universe. pic.twitter.com/4cx7z6HKOg

Yes he certainly did. As did The Great Train Robbers and many other famous crooks

Darwin kept what he called "the creator" in "The Origin"
The Originator Patrick Matthew never did. He mocked "God" https://t.co/ZndN1wQtzH

Posted by Dysology at 01:55 No comments:

More Heritage For Scotland on the Patrick Matthew Story

The Carse of Gowrie Sustainability Group build upon the Patrick Matthew Trail and celebratory weekend with its next initiative.

Watch this space and their Facebook page for news of the forthcoming Patrick Matthew Museum.

Coming Next: The Patrick Matthew Museum!

Are you truly a rational skeptic in search of veracity, or just one more myth parroting mynah bird in a flock?

Don't be punterised by 158 years of scientific establishment discovery myths. Look Behind the mask to discover the New Data facts for yourself https://t.co/UUpZjTHO3e pic.twitter.com/wOANoD87Aa

Posted by Dysology at 12:02 No comments:

Image of comments section on the Patrick Matthew Blog:

Posted by Dysology at 01:43 No comments:

Email ThisBlogThis!Share to TwitterShare to FacebookShare to Pinterest
Labels: abuse

More On the Weirdo Cult of Wikipedia

Further independently verifiable & permanently archived published proof #Wikipedia has become an insidious weirdos cult. Click the link to their revisions page about me. Then scroll down to see, they have most strangely recorded my Twitter feed about them https://t.co/JoBmuvsZxc pic.twitter.com/MRqzpB4vgs

Many were against working class men having vote. Chartist leader Patrick Matthew originated theory of natural selection & wove it in with his politics. His heresy & sedition were loudly condemned. #Orwellian #WikipediaEditors tried to delete the history https://t.co/PIh8hTXzJ0 https://t.co/vI2WOUEjCD

Posted by Dysology at 12:51 No comments:

We are defined by what we do. Wikipedia - the world's most reliably unreliable encyclopedia - is defined  as such by what its long term prolific editors do. As are they.

SOME THINGS IN THE PAST CAN'T BE TAMED 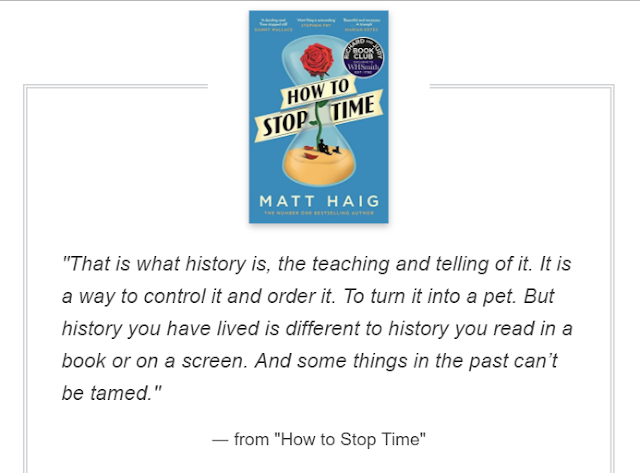 Outside the contorted newspeak nonsense of the weird cult of Wikipedia editors, back in the real world, my British Society of Criminology journal article was thoroughly peer reviewed by two anonymous experts in the field, and I had to edit and re-submit it accordingly. In typical neerdowell pseudo scholar style, these weird cultists refuse to publish the independently verifiable proof that it was peer reviewed. The reason they are doing this appears to be simply because they cannot bear the independently verifiable newly discovered facts in it that show Charles Darwin was a serial lying plagiariser of Patrick Matthew's (1831) prior-published conception of the theory of macroevolution by natural selection. Unable to deal with those facts and more besides they are desperately writing deliberate and malevolent falsehoods (archived here) to deny they are in a most highly respected peer reviewed scholarly journal. 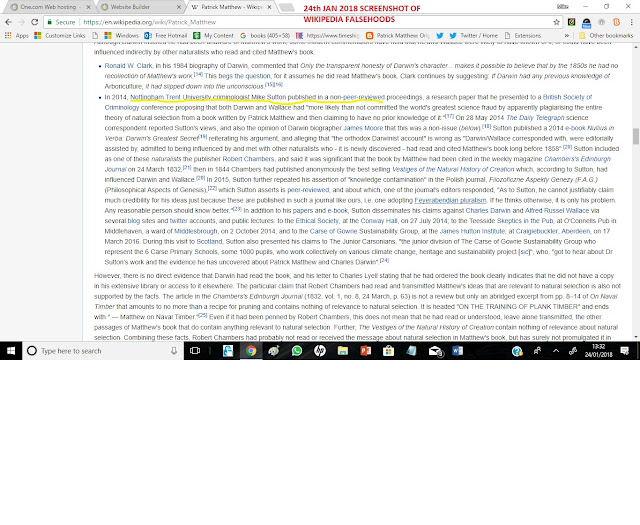 
This is exactly why, worldwide, all university students are forbidden from citing Wikipedia unless they are referencing its editors academic wrongdoing and persistently reliable inaccuracy.  Here is the fact based independently verifiable proof that the article in question -  The hi-tech detection of Darwin’s and Wallace’s possible science fraud: Big data criminology re-writes the history of contested discovery (the article is here) - was peer reviewed (that proof is here). This published proof, freely available in the public domain, is just one among a multitude of verifiable facts prolific Wikipedia editors of long standing are desperately denying in the last throes of their credulous Darwin worshipping unscholarly and unscientific fact denial behaviour http://www.britsoccrim.org/volume-14/ cult.

Here is the editor's revisions page of the Patrick Matthew page on Wikipedia where these facts are being denied with malevolent and malicious falsehoods https://en.wikipedia.org/w/index.php?title=Patrick_Matthew&action=history  (archived here because the most senior of Wikipedia editors have been deleting the entire history (verifiable evidence here in their own published words) of what the one prolific Wikipedia editor of long standing, he who has been prolifically editing Wikipedia's page about me - the very same one who sent me the malicious and malevolent obscene misogynist tweet below - has published in one of their weird cultish silly Billy "chat rooms" in the public domain. Of course, what these poor fools don't realise is that on the Internet "delete never means delete". The defamatory published statements, and evidence of Wikipedia's guilt in deleting the lot, have all been archived for forthcoming action.

More independently verifiable proof from the publication record of malicious and malevolent behaviour of Wikipedia editors, and of  published Wikipedia falsehoods, are available in this portable pdf file. And further details can be found on the relevant page on Patrick Matthew.com . Why are these fact deniers so desperately exposing their dishonesty?  Just Google "Darwin Science Fraud" - what is your first hit? Here is mine at the time of writing.
+

@Dysology Look here you supercilious cunt, I told you who I was immediately. Stuff ur haughty "Wasn't that hard for you was it?" up ur arse
— Jafe (@JFDerry) February 1, 2016

Check out this quote. Very apt for fact denial editors of #WikiMalFarm
"“I cannot go back. If I slipped I might ... https://t.co/30lLZvUhuG
— Dr Mike Sutton (@Dysology) February 3, 2018

I reviewed it. Creationists, like Wikiedia Editors, despise me because Matthew the originator of evolution by natural selection mocked God in a way Darwin never (who in fact wrote that "the Creator" set it up in nature) I prov Darwin stole it from Matthew: https://t.co/PG39CBw32V
— Dr Mike Sutton (@Criminotweet) February 3, 2018

He is probably a wikipedia editor then
— Dr Mike Sutton (@Criminotweet) February 3, 2018

Whatever it is it "Looks like a Wikipedia Editor" #WikipediaEditor pic.twitter.com/jfkvfovKgo
— Dr Mike Sutton (@Criminotweet) February 4, 2018

You should not deny facts to make history your pet
"That is what history is, the teaching and telling of it. It ... https://t.co/mnflweCptr
— Dr Mike Sutton (@Dysology) February 3, 2018

Posted by Dysology at 00:49 No comments: