Posted by Dysology at 14:27 No comments:

Email ThisBlogThis!Share to TwitterShare to FacebookShare to Pinterest
Labels: VIP

Posted by Dysology at 22:59 No comments:

Email ThisBlogThis!Share to TwitterShare to FacebookShare to Pinterest
Labels: Heresy

No Darwin Medal for anyone proving Darwin a liar and fraudster

And where's my Darwin Medal @SteveHall5582 for my research that proves Darwin lied about the origination of the theory of natural selection? pic.twitter.com/BXO6QsiMCm

Posted by Dysology at 00:49 No comments:

Posted by Dysology at 10:42 No comments:

On Corruption in the Darwin Industry and Royal Society

With regard to Darwin and Wallace's replication of Patrick Matthew's prior published theory of natural selection.

Ignoring completely the accepted Arago Ruling on first and foremost priority for a discovery going to whoever had their original discovery published first, the Royal Society awarded the Darwin medal, and its most prestigious Copley medal, to Wallace. Why?  For replicating Matthew's (1831) prior-published theory in 1858 and for claiming it as his own. If that was not a corrupt act by the Royal Society then what is?

No one is ever going to win the Royal Society's Copley Medal now - never mind one of its Darwin Medals - for originally proving Matthew's book, containing the full theory of natural selection, was read and cited by Darwin's and Wallace's friends, influencers and editors and their influencer's influencers before Darwin and Wallace replicated Matthew's original conception and claimed to have done so independently of it. Just Google "On Knowledge Contamination" (put it in those speech quotes - its a simple Big Data trick) to find the peer reviewed truth of what has been discovered on this topic.

How can we ask the scientific community to stand up to Trump's anti-vaccination and anti-global warming claptrap when its most esteemed institution is corrupt?

In 1860, 157 years ago, Matthew wrote two letters - both published in the Gardener's Chronicle of that year -  claiming his priority.

Darwin wrote to admit Matthew got the entire thing first - 27 years in published print (in 1831) before he and Wallace replicated the theory in their papers presented before the Linnean Society n 1858.  Yet Darwin continued to call it "my theory" and lied by claiming no naturalist/no one at all had read Matthew's original ideas. Darwin wrote those falsehoods even though Matthew had prior- informed him of two naturists who did read his ideas pre-1858.

Nevertheless - even despite what has been newly discovered about Matthew's prior-influence-  the Arago Ruling was ignored by The Royal Society.

Before we can take on the likes of  Donald Trump's tweets that vaccinations cause autism and global warming is a Chinese conspiracy (here), our esteemed institutions of science must first put themselves in order. We need an inquiry into the corruption that is the so-called Darwin Industry.

Posted by Dysology at 00:54 No comments:

Email ThisBlogThis!Share to TwitterShare to FacebookShare to Pinterest
Labels: corruption, No Royal Society Medal for writing the truth

Posted by Dysology at 07:12 No comments:

On Corruption in the Darwin Industry

Oxford University Press: "We have a problem"
The Royal Society" "What now?"
Oxford Uni Press: "It's with the truth"https://t.co/cFOKLMaYZD pic.twitter.com/gHY7Y2eLcS

Confirmatory evidence, established by way of a most equistie telling question, that the Darwin Industry is corrupt: https://t.co/cFOKLMaYZD pic.twitter.com/xLrSp9rP0z

@Criminotweet Looks like the v small book was a publisher's compression of other stuff. Not so much corrupt as lazy and dumb, I suspect

.@deerbrian Maybe not when you see it in context of Moore's de facto fact-denial behaviour in the national press: https://t.co/70ZRzXgAuL pic.twitter.com/lgOB3x2LMg

It's time we learned to distinguish establishment cover-ups from unevidenced conspiracy theories. Both do exist! https://t.co/FZs1Iqew3j pic.twitter.com/zG7hn9GxDL

Posted by Dysology at 06:22 No comments:

Email ThisBlogThis!Share to TwitterShare to FacebookShare to Pinterest
Labels: corruption

Proof of the knowledge contamination concept as views of my article on that topic march towards 10,000: https://t.co/LMpbVPMAh6 pic.twitter.com/nyGiEg1Ykl

Posted by Dysology at 01:48 No comments:

Email ThisBlogThis!Share to TwitterShare to FacebookShare to Pinterest
Labels: on knowledge contamination

The 4-U's of Research

Posted by Dysology at 01:42 No comments:

Email ThisBlogThis!Share to TwitterShare to FacebookShare to Pinterest
Labels: 4-U's

It has all Gone Trump Shaped for the Royal Society

Posted by Dysology at 00:46 No comments: 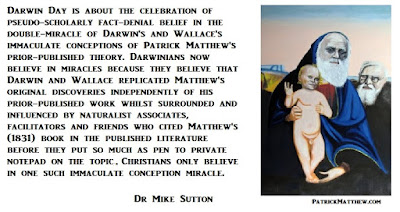 "No one will EVER win the Nobel Prize
For proving
Darwin lied and Plagiarized."https://t.co/LMpbVPMAh6
It's too embarrassing for science pic.twitter.com/7ULsyNTDHe

Just ordered copy of this book. I see it very kindly mentions the spinach mythbust @joeschwarcz . I have another one https://t.co/LMpbVPMAh6 pic.twitter.com/APHQy7x4AP

Posted by Dysology at 09:00 No comments: