Darwin the thief's notebooks stolen, how ironic is that: Theft of a Theft

We now know that it is beyond all reasonable doubt that Darwin (and Wallace) stole the entire theory of evolution by natural selection from its prior-published originator Patrick Matthew. You can't argue with that data -and that is plainly presented here in an exert  peer reviewed science article. A timeline of Darwin's and Wallace great theft by fraud is here and the whole story can be read in my book (here).

Today we learn that Darwin's notebooks, including the one with his twig of life (it's not a tree), have been stolen from Cambridge University (here).

So the headline should really be "Theft of a Theft".

The concept of a tree of life heuristic device, used to explain evolution was certainly not Darwin's origination either. Karl Ernst von Baer 1826 had drawn one and published one years before Darwin replicated the idea. See Brauckmann (2012)  Image below thanks to Brauckman here 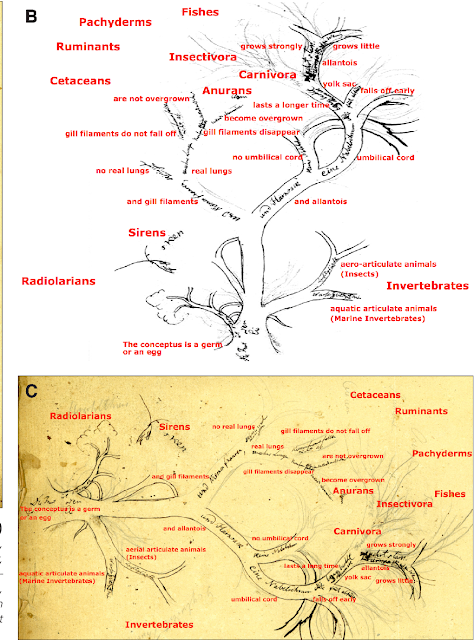 Theft of a Theft. @LaxmiAggarwal1

How ironic is the theft of "Darwin the Thief's" plagiarising notebooks from Cambridge University?

2 Darwin's glory thieving plagiarism. Get the facts of his thieving science swindle https://t.co/oWgFTOn1XC

Posted by Dysology at 05:59 No comments:

The Danger of Appeals to Authority

Too many so called experts are trained but not educated. Proper education teaches how to think and find things out for yourself.

Posted by Dysology at 08:16 No comments:

Fact is Patrick Matthew got it right about such major extinction events and Darwin got that totally wrong - which is about the only bit he never plagiarised from Matthew. Because Darwin wanted to please Charles Lyell who promoted: uniformitarianism theory https://t.co/4W0qlBAxt2

Posted by Dysology at 13:18 No comments: