Smoking Gun Evidence: What is it Exactly? Proposing the Concept of "Gunsmoke Evidence" 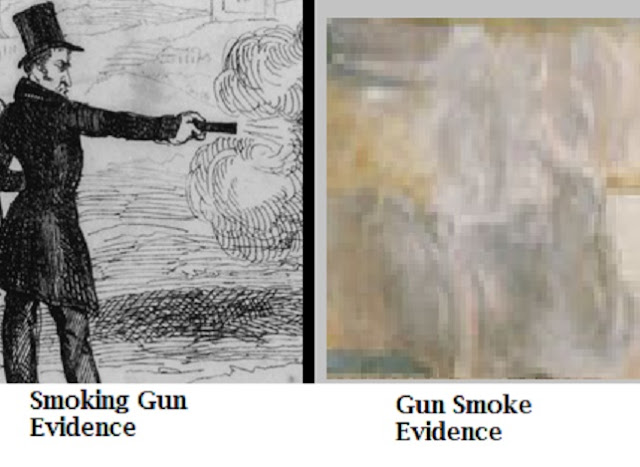 The term "smoking gun" is generally held to mean an item of of incontrovertible incriminating evidence. My 19th edition of Brewer's Phrase and Fable (2012. p.1253) explains:
'The phrase acquired a particularly apt association with the widely diverging views, before, during and after the invasion of Iraq in 2003 about whether Saddam Hussain still possessed WEAPONS OF MASS DESTRUCTION. Their discovery would have been hailed by the finders as a smoking gun.'

At the time of writing, Wikipedia is once again wrong in its etymology, this time to claim that the term 'smoking gun' derives from an 1893 Sherlock Holmes story.

Anyway, better than mere 'smoking gun' incriminating evidence of Wikipedia's mistake exists, because  it is 100 per cent proven to have been used in published print at least as early as 1878 (Appleton's Journal. p. 17):

'Two men approached, the younger with a smoking gun:

"So it's you, is it?" said she as he came up.
"It is I" said he with a smile.
"Well I think you've got very little to do to go round shootin' fleckers. This one in particular. I was just gettin'  used to him."

On Smoking Gun Evidence in the story of who really did read Patrick Matthew's prior published origination of the hypothesis of natural selection.


Darwin and Wallace (1858) and Darwin (1859) replicated Matthew's origination of macroevolution of natural selection. They failed to cite Matthew, and they claimed to have arrived at Matthew's prior-published bombshell concept independently of Matthew. Darwin and Wallace excused themselves for doing so by claiming (as a proven lie in Darwin's case) that Matthew's ideas were unread by any naturalist  / anyone at all before 1860. In reality, as opposed to the credulous zombie-hoard mynah birding of Darwin's lies (e.g. de Beer 1962, Mayr, 1982), by Darwin's followers and promoters, the Darwinists, Darwin's and Wallace's friends, associates, correspondents and facilitators and their influencers influencers, the naturalists Loudon, Chambers, Selby and Jameson all read and cited Matthew's book pre 1858 (see Sutton 2014).

So what constitutes 'smoking-gun' evidence in this case?  I would propose that there are three areas where the usefulness of the phrase needs to be examined.

The 'New Data' discovered in 2014 and first published in Nullius in Verba provides better than mere smoking gun evidence for 2 and 3 above. We know other naturalists did read Matthew's orignal ideas pre-1858, because they cited his 1831 book before that date and mentioned those original ideas. The 100 per cent proof of the matter exists in the print record of the 19th century published literature.  And Darwin's lies are proven because before he wrote them Matthew informed him in print in the Gardener's Chronicle (1860), very clearly and forcefully, that at least two naturalists did read his ideas and that his book was banned by the public library of Perth in Scotland (see Sutton 2015 and also Sutton 2016). But, with regard to point 1, above, we have not discovered a letter to or from Darwin or Wallace, or a notebook or diary entry, anywhere, that indicates Darwin or Wallace read or were told about Matthew's (1831) book before they replicated so much of Matthew's orignal work. But the fact that much of Darwin's and Wallace's and the notebooks and correspondence of other 19th century naturalists is lost or destroyed means that absence of evidence in this regard cannot rationally be considered as evidence of absence it ever happened.

However, what we do have with regard to point 1 is solid proof that some form of pre-1858 Matthewian knowledge contamination of the minds of Wallace and Darwin could have happened via Loudon, Selby, Chambers, Jameson and others newly discovered to have read and cited Matthew's (1831) book pre-1858.

And we know that knowledge contamination can take place in at least three main ways (see Sutton 2016):

From the solid evidence from the correspondence and publication record of the 19th century (see Sutton 2104 for the fully cited proof of the following facts) we know that academics talk and share sources and ideas. We know that editors insist on changes and insertions to text and we know that Loudon edited two of Blyth's influential articles - which influenced Darwin and Wallace. We know that Loudon was a friend of Lindley (William Hooker's best friend, who was the father of Darwin's best friend Joseph Hooker) and a correspondent of William Hooker. And we know that William Hooker was Wallace's mentor and correspondent from as early as 1848 and that they met before Hooker wrote a letter of introduction for Wallace in 1848 so that he could set off specimen collecting for cash - some of which came his way from Hooker. We know that Selby edited Wallace's Sarawak paper,  was a friend of Darwin's father and Darwin's good friend and most frequent correspondent Jenyns. We know that Selby was a close associate of William Hooker's circle and we know that Chambers met and corresponded with Darwin pre-1858. Moreover, we know that Jameson was a regular correspondent of William Hooker pre-1858. All this, if not "smoking gun" evidence, is certainly evidence of multiple whiffs of gunsmoke; a type of evidence classed as "circumstantial evidence". In the story of Darwin, Matthew and Wallace there is an awful lot if it - and much more than is covered in this blog post (see Sutton 2014) This circumstantial evidence, combined with more than smoking-gun proof of Darwin's lies, and proof that the original ideas in Matthew's (1831) book were cited by Darwin's and Wallace's influencers and their influencer's influencers pre-1858, completely punctures the 'no naturalists read Matthew's orignal ideas pre-1858' and the 'honest Darwin' myth' - upon which is founded the old paradigm of Darwin's and Wallace's supposed dual independent conceptions of Matthew's prior-published hypothesis. 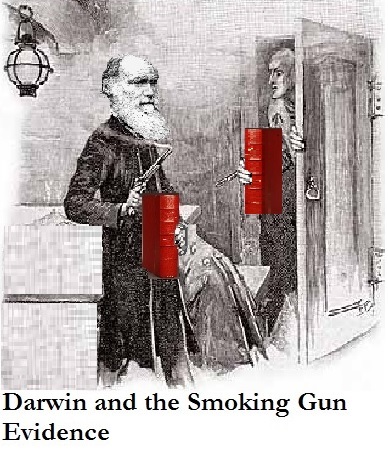 From this four-point analysis, it can be argued that insistence upon smoking-gun evidence to substantiate claims of Darwin's and Wallace's probable Matthewian 'knowledge contamination' is based upon a misunderstanding of the better than mere smoking gun paradigm busting facts of the New Data in this story and of the gun-smoke significance of the multiple examples of newly discovered clear routes for Matthewian knowledge contamination of the pre-1858 minds of Darwin and Wallace.


Please note: Wikipedia's corrupt editors are not averse to altering its story-lines by plagiarising my orignal discoveries and passing them off as their own (as they did with my unique discovery of the origination of the term 'moral panic') - so their fallacious account of the origin of the term "smoking gun" will undoubtedly change at some point, but without citation to this blog post.