How does the world really work versus knowledge gap filling mythology

Why do we still talk about transparently absurd pseudoscience? My conclusion: we need to be more curious about how the world really works. https://t.co/eKMrB9iihH

Absolutely. Newly unearthed facts proving Charles Darwin & Alfred Wallace both plagiarised the theory of evolution by natural selection have deeply upset the scientific establishment, leading them to shameful silly attacks on me. Here is just one example: https://t.co/y6D1rl1NIy

Posted by Dysology at 02:25 No comments:


Wallace never discovered that bee at all. A local took it to show him! Here


Wallace never "discovered it". A local took it to him. Maybe that local showed him Matthew's book containing the theory of evolution he never discovered either, because it was prior published in that book & cited by Selby his Sarawak paper editor & friends of his mentor W. Hooker pic.twitter.com/iiOp69O7Ow
— Dr Mike Sutton (@Criminotweet) February 23, 2019

Posted by Dysology at 02:17 No comments:

Email ThisBlogThis!Share to TwitterShare to FacebookShare to Pinterest
Labels: Wallace

Something wrotten about some scientists

YES! How about case where editor resigned from editorial board of science journal that dared publish newly unearthed independently verifiable facts about Darwin's and Wallace's plagiarism & lies regarding Matthew's prior published breakthrough. https://t.co/y6D1rl1NIy

Posted by Dysology at 02:06 No comments:

If you ever thought it was an exaggeration that there is a credulous, ignorant of the facts, Darwin worship cult, here is some up-to-date confirmatory evidence for its existence

If you thought it was an exaggeration that there is a credulous, ignorant of the facts, Charles Darwin beatifically delusional worship cult, here is some hard confirmatory evidence for its existence. Look at their faces.https://t.co/ZFhF6COVXa

Posted by Dysology at 00:54 No comments:

Posted by Dysology at 06:49 No comments:

Darwin needs removing. He plagiarized theory of evolution by natural selection & later lied about who he knew who had prior read it & even called it "the origin of species" in 1832, years before Darwin's & Wallace's 1858 @BiolJLinnSoc Linnean Society fraud https://t.co/CLKiPRJoQT pic.twitter.com/MPrrSKqx7f
— Dr Mike Sutton (@Criminotweet) February 11, 2019 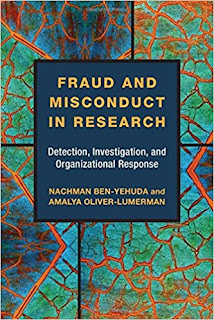 #BigData research uncovered fact Darwin now needs removing from such lists and adding to lists of the greatest plagiarizing science fraudsters ever
1. https://t.co/uDWRdLPKJd 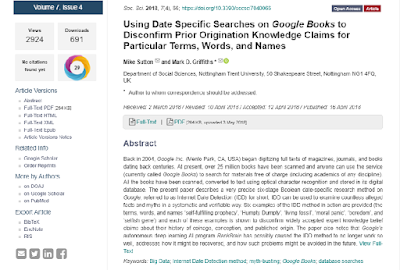 Posted by Dysology at 00:21 No comments:

It's about time stalkers got their due,
Here it comes,
About time toohttps://t.co/4trgbdtLx7

Posted by Dysology at 10:15 No comments:

Email ThisBlogThis!Share to TwitterShare to FacebookShare to Pinterest
Labels: stalker

The Linnean Society and its Shameful Role in Supporting Plagiary

Amazing just how much of a role the esteemed Linnean Society @BiolJLinnSoc @BotJLinnSoc @LinneanSociety @ZoolJLinnSoc has played in supporting the credulous worship of plagiarists and proven woo-woo idiots. And it continues to do so today. Get the facts: https://t.co/MDFL9kDbMG pic.twitter.com/9qDbrNBJ7n

Posted by Dysology at 06:07 No comments:

Darwin was fooled by total quackery and Wallace was a total idiot too: But we don't have to be

Darwin fell for that quackery - hook line and sinker. Mind you his co-plagiarising science fraudster Alfred Wallace believed in spirits and mediums and was an ardent moronic anti-vaxxer.
1. https://t.co/18mAp7rAa9
2. https://t.co/muy4S2llD3
3. On fraud: https://t.co/zflwNCG4Zd pic.twitter.com/IPgwXM4nwT

Mind you, Darwin and Wallace worshippers are as bad. They credulously believe in Darwin's and Wallace's claims to have miraculously conceived Patrick Matthew's prior published theory (Darwin from the literature and Wallace from the first and only claimed case of malarial fever cognitive enhancement) after their friends and influencers and influencer's influencers cited Matthew's book and the bombshell theory in it: https://www.amazon.co.uk/Nullius-Verba-Darwins-greatest-secret/dp/1541343964

Posted by Dysology at 13:10 No comments:

Email ThisBlogThis!Share to TwitterShare to FacebookShare to Pinterest
Labels: quackery

In 1850 the famous naturalist and publisher John Loudon listed Patrick Matthew (here) as an acknowledged botanist.

After Darwin and Wallace plagiarised his work, Matthew was also listed as a noted botanist in the 1881 Jackson's Guide to the Literature of Botany (here) and again (noting that "Jacks" reference) as a noted botanist here on page 116 of than 1898 Biographical Index of British and Irish Botanists, in which the authors of that guide write in its preface that they excluded inclusion of obscure or trivial writers on the topic). 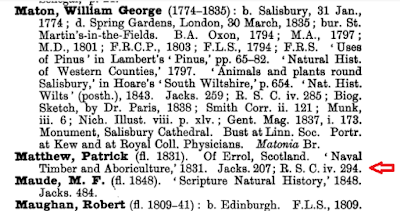 In order to get away with plagiarising Matthew's prior published theory of evolution by natural slection, the proven serial liar and plagiarist Charles Darwin, however, slyly portrayed Matthew as an obscure Scottish writer on forest trees. Despite the ridiculous myth perpetuated by cult-like credulous Darwin worshipers, the reality is that  Matthew enjoyed an international reputation as a noted botanist and expert on the topic of hybridizing and cultivating fruit trees. 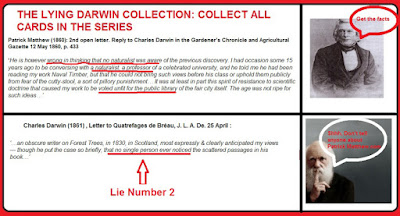 Posted by Dysology at 03:39 No comments: