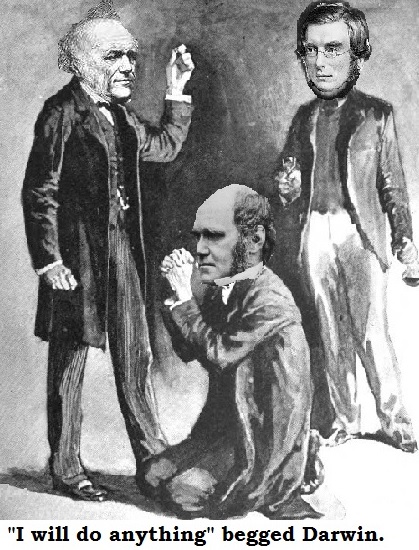 A series of letters passed between Darwin and his hugely powerful naturalist friends and mentors Charles Lyell and Joseph Hooker.

As I reveal in Nullius (Sutton 2014), Darwin emotionally manipulated them at Chritmastime by vacillating between pretending not to care about priority for the discovery of natural selection, when his baby son had just died, and proclaiming that he would do anything to ensure he got it. By such means Hooker and Lyell were apparently emotionally manipulated to present Darwin's paper before Wallace's Ternate Paper - so that it would thereafter be called 'Darwin's and Wallace's theory'; and to do so when Wallace had not given permission for his paper to be read, but to mislead the Linnean Society into thinking he had. Later Wallace would ask for and receive money and favours from the three for what they did with his paper and for his public acceptance of their arrangement. It is originally revealed in Nullius that Wallace later fraudulently doctored a copy of a letter in his autobiography to conceal the fact.

I have just read your letter, & see you want papers at once. I am quite prostrated & can do nothing but I send Wallace & my abstract of abstract of letter to Asa Gray, which gives most imperfectly only the means of change & does not touch on reasons for believing species do change. I daresay all is too late. I hardly care about it.

But you are too generous to sacrifice so much time & kindness.  It is most generous, most kind. I send sketch of 1844 solely that you may see by your own handwriting that you did read it.

I really cannot bear to look at it. Do not waste much time. It is miserable in me to care at all about priority.

The table of contents will show what it is. I would make a similar, but shorter & more accurate sketch for Linnean Journal.  I will do anything

God Bless you my dear kind friend. I can write no more. I send this by servant to Kew.