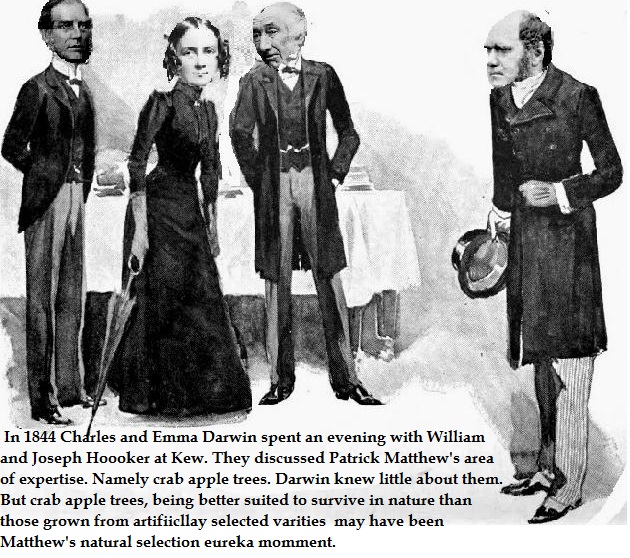 In 1844 Darwin and his wife Emma met William and Joseph Hooker (who were very well known to John Loudon, John Lindley, Jameson and Wallace) for an evening at Kew. Their transcribed correspondence  (see also ar Darwin Online) reveals that they discussed crab apples. Darwin would later hide behind Emma in his correspondence to Matthew. And Hooker and Darwin agreed that only naturalists with specific collecting and species classification experience such as they, excluding others such as Matthew, should be allowed to write on the subject of transmutation of species,

In Nullius (Sutton 2014) I explain the importance of crab apple trees as an explanatory analogy of differences for the difference between natural and artificially selected varities of  plants and animals and how those long selected by nature are far better able to survive in the wild than those selected by human breeding (artificial slection) interference. Being an internationally famous apple grower and breeder in the 19th century, Matthew mentions crab apple trees in this regard quite a lot in his (1831) book - On Naval Timber - which is the the first publication of the full hypothesis of macro evolution by natural selection.

Matthew (1831) was the first to write the artificial v natural selection explanatory of differences. It is so important that Wallace used it in his (1858) Ternate Paper and Darwin used it to open the very first chapter of the Origin of Species.

In Nullius, I also discuss how fruit trees were the very first thing that Darwin wrote about organic evolution in his 1837-38 private Zoonomia notebook, and how his notebook of books read reveals that pre-1858 held in his hands five publications - including one all about apples written by Matthew - citing Matthew's work on fruit breeding and trees. Darwin (1837-1838)  being no expert could not even consistently spell pippin correctly.The plodding replicator wrote:

In Nullius I reveal that there was a copy of Matthew's (1831) book in the library at Kew, but that a librarian there, searching for it at my request, informed me this valuable book was "missing" and so had been, apparently, stolen. Hence, we may never know whether it was one of the books William Hooker donated to the library pre-1858.