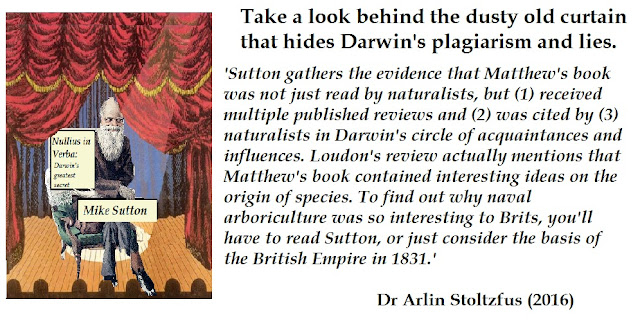 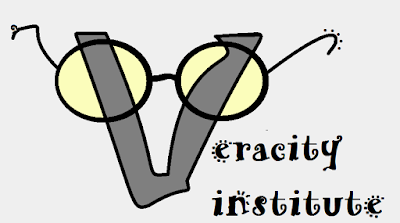 '...to someone who has read parts of what Sutton has written, your reply looks very foolish. Contrary to what you state, Darwin does not "cite Matthew as a source" of his thinking. Instead, Darwin admits that Matthew preceded him, but then claims that no naturalists paid attention, and he indirectly blames Matthew for this (by putting his theory in the appendix of an obscure mis-titled book on naval arboriculture). That is, Darwin continues to take credit for what he calls "my theory", and simply writes himself a set of excuses for *not attributing Matthew as the source*, e.g., by referring to it as "Matthew's principle of selection."

Sutton gathers the evidence that Matthew's book was not just read by naturalists, but (1) received multiple published reviews and (2) was cited by (3) naturalists in Darwin's circle of acquaintances and influences. Loudon's review actually mentions that Matthew's book contained interesting ideas on the origin of species. To find out why naval arboriculture was so interesting to Brits, you'll have to read Sutton, or just consider the basis of the British Empire in 1831.

*Clearly*, Matthew has priority by ordinary scholarly standards, and clearly Darwin misrepresented the situation by spinning a yarn about Matthew's obscurity. Sutton points out that Darwin's followers have uncritically repeated that yarn for 150 years.

The only remaining question is whether Darwin was actually influenced in some way, which might range from vague diffusion of ideas through a personal network, to stealing the ideas and trying to hide it.

Sutton offers textual evidence that Darwin was influenced by Matthew, and points out personal connections that may have been a conduit for this influence. I have not spent much time reviewing this evidence, but it is based on similarities of phrasing. There is no smoking gun.

However, now that Sutton has pulled back the curtain on this, it is no longer responsible in scholarly writing to assert that Darwin wasn't influenced by Matthew, or even to assert that there is no evidence-- there is circumstantial evidence, however weak. If you doubt the evidence then the appropriate way of saying it is "I'm not convinced by the evidence that Darwin was influenced by Matthew."

But again, this only addresses the issue of borrowing. The issue of priority is already settled, in favor of Matthew.'