Sunday March 20 2022 saw the second part of the on-going serialisation of  "Science Fraud: Darwin's Plagiarism of Patrick Matthew's Theory" in the Scottish national press via the Scottish Sunday Express.

The article can be read here.

If you live in #Scotland you could do worse than buy the Scottish Sunday Express . The @CurtisPress_ science book that 100% proves Charles #Darwin committed the world's biggest science fraud by theft of an entire Scottish theory & lied is being serialized https://t.co/9CdwsGdpLI

Another #Scottish national press instalment of "Dr Sutton Presents" in condensed instalments of bombshell data findings that prove #CharlesDarwin was the world's biggest science fraudster by plagiarism of a prior published theory. This changes everything! https://t.co/utH4HGRNN9

Posted by Dysology at 06:55 No comments:

Science Fraud is now being Serialised in the Scottish National Press

Read the introduction in the Scottish Sunday Express: Here 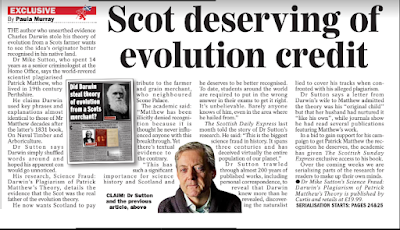 Buy "Science Fraud" Here on Amazon, from the Publisher Curtis Press Direct, or order from your local bookshop. 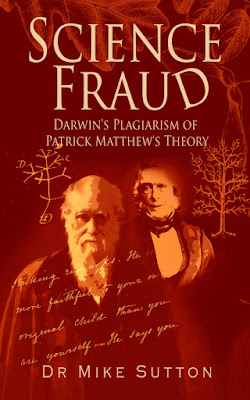 This blogpost of 14 March 2022 is archived HERE

Posted by Dysology at 01:43 No comments:

A Further Investigation of those who were First to Be Second (F2B2): The case of Thomas Laycock

Thomas Laycock is one of the names in my List 2. Not only does "Science Fraud" reveal his works on the theme of organic evolution, it also reveals who he associated with who were associates of Charles Darwin.

But today (11 March 2022) I discovered something more in my continued research into this area. Today, I found that without citing Matthew (1831) Laycock (1832) wrote extensively aping Matthew's work on his observations on the fact that trees that are artificially selected by humans are of inferior quality to those growing in the wild. Here.

This provides yet more confirmatory evidence to support the F2B2 hypothesis stated in Science Fraud, the book.

In my most recent book "Science Fraud: Darwin's Plagiarism of Patrick Matthew's Theory" there are many examples where those in List 2 are found to have been interested in the same lines of enquiry as Matthew, or to have later written about observations he first made, but without citing. Some were F2B2 and later in other publications they then actually cited Matthew's bombshell book "On Naval Timber". All before Darwin and Wallace replicated Matthew's theory and claimed it as their own.

Schacter (2012) Provides further information about Laycock (who first introduced himself to me when I used the IDD method to see if anyone was F2B2 with Matthew's (1831) apparently original phrase "mental or instinctive powers"). Amazingly, although he wrote on Matthew's (1831) topic of organic evolution and used Matthew's apparently original term without citing him Schacter (p.115) reveals that Laycock wrote on the topic of instinct the same concept that Matthew had pioneered.

Schacter's (2012) book "Forgotten Ideas, Neglected Pioneers: Richard Semon and the Story of Memory" was found simply by typing the following search term into Google's standard search page: "Laycock" "Matthew" "Naval Timber" as in the image below.

The result I got today 13.03.2022 is archived Here. And if you scroll down the Google results first page of hits you will find Schacter's excellent book comes up.

Next if we take the same three terms as above - in inverted commas exactly as above - but click for Google to search on books we find Schacter's earlier book also covered this topic. The image below reveals all.

As this research continues to reveal more about the previously unknown life of Matthew's 1831 book, namely who read it and was influenced by it, and who that "knowledge contamination" in turn influenced like a meme, it is important to remember that Laycock introduced himself to me because he was conjured up out of the publication record like a human spectre, living in a long forgotten book in the historic publication record. The spell that bought him forward was simply Googling the apparently coined by Matthew (1831) turn of phrase "mental or instinctive powers."
Those self-proclaimed sceptics who write in desperate defense of the "Darwin Industry" such as Professor Shermer all lacked the most basic but necessary skeptical curiosity to check their own bias when writing in support of Darwin's proven lie that Matthew's theory was hidden in the appendix of his book and that no one read it so it can't have influenced Darwin. Shermer's "its not a zero sum game" flim-flam in that regard is dealt with in Science Fraud. But really, Shermer, and all those other acolytes of the bearded God / father substitute Charles Darwin should have used Big Data analysis of the 40+million or more books and articles now scanned and in the Google library. Namely, Shermer (and others like him) should have looked at who was apparently first to be second (F2B2) with apparently original Matthewisms, as I did. Here is what Shermer writes. Note the excruciating fact that Matthew's phrase "mental or instinctive powers' is there in the text Shermer thinks nobody was influenced by (Shermer 2002) Here.
The plot thickens as we drill down deeper for historical gold in the publication record
When we simply Google "Darwin" "Laycock" the influence of Laycock (who had apparently been influenced by Matthew's 1831 book) on Charles Darwin becomes startlingly clear. Now we see "experts" who were misled by the Matthew Effect in science not to focus their attention on the cultural tracers of Matthew's book explain the influence of Laycock on Darwin: Here
Frank Sulloway (1979) in "Freud, Biologist of the Mind" the writes on the topic here

Archived editions of this page:

Oh the Satire of it all: The Daily Squib Nails the Credulous Darwinite Zombie Horde to the floor of their own stupidity

Today (07 March 2022) The Daily Squib sets the record straight on the Charles - The Dirty Plagiarist -Darwin, the "Darwin Industry" and its enablers - such as the fact censoring and malicious disinformation spreading pseudo-scholars of Wikipedia. Here (archived here) . 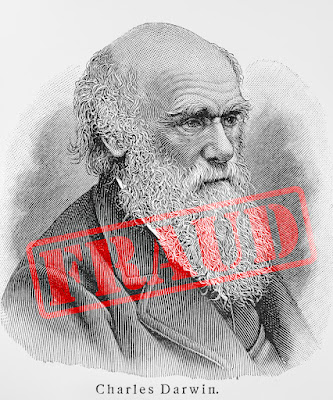 The cat is out of the bag on Charles Darwin's filthy science fraud by lies and plagiarism and no amount of the traditional fact denial pseudo scholarship of the Darwin Industry can ever get it back in https://t.co/QgQGmQ8wcM @CurtisPress_ @DailySquibs @DAILYSQUIB @SoniaPoulton

Posted by Dysology at 11:08 No comments:

Conspiracy theorists are those who claim coverups whenever insufficient data exists to support what they're sure is true. This is completely unacceptable ... this fact denial approach to Matthew's theory of natural selection has been pushed for long enough by the likes of Wikipedia. https://t.co/9BwStVqZEj

Posted by Dysology at 08:46 No comments: