Nature: The dear old Nurse . A poem for all Darwin fact-hater super fans

Get the facts and bury the claptrap at PatrickMatthew.com

The Publication Record
And Nature the old Nurse, took
The professor upon her knee,
Saying, 'Here is a story, un-cooked
By Darwin for thee.
Come wander with me', she said
'Into books buried, yet undead,
And read what is still unread
In the manuscripts you dread.'
And he wandered deeper and deeper
With Nature, the dear old Nurse,
Who sang to him night and day
The truth of the universe.
By Mike Sutton (with apologies to Longfellow)
Posted by Dysology at 03:32 No comments:

On the inside of  the dust jacket to his new book: "The Knowledge Machine: How an Unreasonable Idea Created Modern Science" Professor Michael Strevens writes:

"...science calls on its practitioners to do something apparently irrational: to strip away all previous knowledge - such as religious, metaphysical or political beliefs - in order to channel unprecedented energy into observation and experiment.' 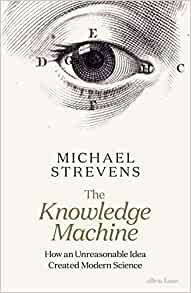 Interestingly, it was certainly his religious heresy and possibly also his membership, as a Scottish regional representative (see here), of the radical political reformist Chartist movement that led 19th century writers, including some natural scientists (such as john Lindley, who despised and feared the Chartists), to do the dirty on Matthew (see here) or else fear to be associated with his bombshell 1831 breakthrough of the origination of the theory of evolution by what he called the  'natural process of selection.'

Then in the 21st century, the breakthrough of Big Data searching in Google's library of millions of books (Sutton and Griffiths 2018) allowed me (see e.g. Sutton 2015) to find and then to observe in the historical publication record that it is a science myth that no naturalist read Matthew's theory before Darwin and Wallace replicated it (along with many of his essential highly idiosyncratic explanatory examples and analogies). Moreover, I then conducted and experiment (here) to reveal how even to this day the quasi-religious cultish Darwin Industry is involved in  fact denial of what exists in the printed publication record about what 19th century readers wrote on Matthew and his theory before Darwin (1858, 1859) and Wallace (1855, 1858) plagiarized it and then defended their action by claiming no single person had read Matthew's theory before he claimed it was his in a published letter of 1860.

Therefore, it is scientific attitude and techniques that allowed the "knowledge machine" of science, based upon independently verifiable new data, to replace the myth of Darwin's and Wallace's miracle independent conceptions of a prior published theory (that was read and cited by their friends and influencers before they replicated it See Sutton 2017) with the facts of their plagiarism of Matthew and historical and modern day machinations of Darwin fanatics to try to bury the facts of it from the wider public.

Strevens (p. 7) reasons that the fundamental rule of science is that any dispute between people about what is the truth of something must be made made with refence to empirical evidence. However, that said, he points out that the significance of the evidence is a separate matter and must be determined outside of this "Iron Rule" of evidence.

Regarding the new data that I uncovered, which proves all the scientists were wrong to parrot Darwin's lie that no single person read Patrick Matthew's (1831) book On Naval Timber, that data is evidence Matthew's book was read, because at least 30 people are now proven to have cited it in the literature before Darwin and Wallace replicated the theory in it in 1858. To date, the only arguments made against the argument that Darwin plagiarised Matthew are unscientific arguments, because they are based on no evidence. Take for example, Moore's unscientific knee jerk rejection argument against the Darwin Plagiarised Matthew Hypothesis (in Knapton 2014) - a ludicrous argument that is on Wikipedia's Patrick Matthew page as though it is valid rather than unscientific opinion:

“I would be extremely surprised if there was any new evidence had not been already seen and interpreted in the opposite way.”

In reply to Moore, at least according to the hard evidence of his unevidenced reply to the New Data evidence of  Darwin's plagiarism and his proven lies about Matthew (Sutton 2017), "I would be extremely surprised if he knows what a scientific argument is, or how to conduct one."

Strevens (p.24) points out that most scientists do not follow any particular paradigm because they believe it is well supported by the evidence, or because it is the "official one" or because it is the one best funded, instead the reason the follow it is because they cannot imagine the truth being different to it. And on p. 25) he explains further:

"Scientists, like anyone else, see and understand things at any one time from a particular worldview ...it shuts down scientists' capacity to comprehend genuine novelty. ...if the old worldview is incompatible with the new, then you can't see the new view from the perspective of the old either. The new view is simply out of sight."

On page 98, Strevens tells us that what works against this problem in science is what he calls "The Iron Rule" and that is data from observations or experiment that confirm or disconfirm current ideas, knowledge claims, hypothesis and theories.

"The iron rule encourages, instructs, obliges, or forces contending scientists to engage each other with observable fact alone. ...The rule thereby harnesses the oldest emotions to drive the extraordinary attention to process and detail that makes science the discriminator and destroyer of false ideas."

And it was by way of my application of this iron rule to bust with newly detected observable facts in the historical publication record the self-serving supermyth started by Darwin that the theory of  macroevolution by the natural process of slection that is in Patrick Matthew's (1831) book 'On Naval Timber and Arboriculture' (NTA) was totally unread by anyone whatsoever/any naturalist before Darwin and Wallace replicated it in 1858. I found at least 30 people cited NTA in the literature pre-1858, and that means many more, probably many thousands more besides, read Matthew's 1831 theory before 1858. Because most people who read something do not then go into published print to write about it. Especially not when to do so breaks the scientific and wider establishment strictures against writing anything that questions theological doctrine about the origin of species on our planet, which was the case in the first half of the 19th century, before Robert Chambers (newly discovered to have cited NTA pre 1858) put evolution in the air in his anonymously authored best selling book 'Vestiges of the Natural History of Creation' and was then acknowledged by Wallace as his greatest influencer, and was also avidly read by Darwin pre-1858.

With apologies to Longfellow, here is a little bit of educational doggerel for all you other fact-hater Darwin super fans out there:

And Nature the old Nurse, took
The professor upon her knee,
Saying, 'Here is a story, un-cooked
By Darwin for thee.
Come wander with me, she said
Into books buried, yet undead,
And read what is still unread
In the manuscripts you dread.'
And he wandered deeper and deeper
With Nature, the dear old Nurse,
Who sang to him night and day
The truth of the universe.
Posted by Dysology at 05:09 No comments:

The thing about the history of Matthew, Darwin and Wallace is that it is a tale of story making about story making. How to turn it into a veracious and coherent narrative is a challenge for the 21st century. 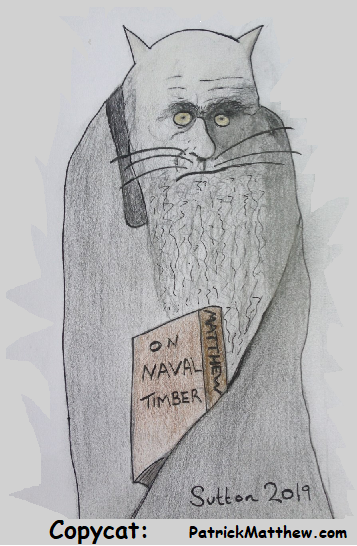 Posted by Dysology at 08:32 No comments: