Are lies the truth and truth a lie? Ask any credulous fool teaching debunked nonsense about Darwin and Matthew

Tens of thousands of credulous idiots posing as scientists in our universities, that's who. https://t.co/p7BFAMgNJ6 pic.twitter.com/05AD6FloZS 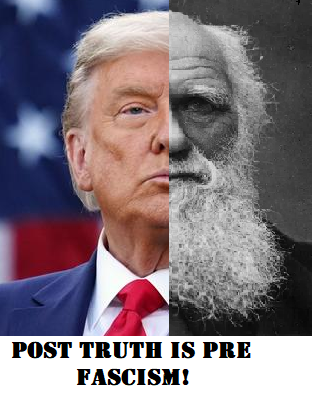 Posted by Dysology at 07:13 No comments:

Email ThisBlogThis!Share to TwitterShare to FacebookShare to Pinterest
Labels: On post-truth age truth and lies and Darwin

Trump, enabled and facilitated by publishers, broadcasters and Republican politicians, managed to convince 70 million people that lies are the truth and the truth is a lie when he lied that he never lost the USA general election. And he lied that the election result was a fraud.

But the world's greatest science fraudster by plagiarism and serial lying - Charles Darwin - went further and did far greater harm when he convinced hundreds of millions that his lies about Patrick Matthew are the truth. That dishonest behaviour - facilitated, enabled, abetted and aided by members of the science establishment - most likely killed millions via the Holocaust: https://patrickmathew.blogspot.com/2019/09/did-darwins-plagiarism-and-lies-cause.html

Truth has no dark shadows where deadly lies can hide. Embrace the truth and condemn those who tell and facilitate lies.

Trump tried to convince us all the truth is a lie and lies are the truth. He failed.

It has long been said that lies kill. Trump's lies have killed. Today he is being impeached for lying to incite a lethal riot. He convinced 70 million people to believe his lies. pic.twitter.com/aIzPnu6ddc

Darwinite cult alternate reality based on lies and mass deception of the scientific community. Get the independently verifiable facts. See the images below as 100% proof of Charles Darwin's lies about the theory he stole and then called his ownhttps://t.co/Cqp2XgJAGH pic.twitter.com/qBZThsHpFp

The cost of lies & credulity in science in the scientific establishment.

Wrongly promoted as a genius, how many lives did the myth of Wallace take?https://t.co/4IYNfJ5cdl pic.twitter.com/n7Ihrbntkg

Posted by Dysology at 10:57 No comments: