Should the Chinese government should be entered in competition for a Patrick Matthew award for irony?
.

According to an email I received from an academic today, #China is making it difficult for researchers there to examine the evidence that the landed gentry #Toff Charles Darwin plagiarized the theory of a Chartist leader Scottish botanist: pic.twitter.com/jt2QSyghtC

Posted by Dysology at 02:40 No comments:

If ever you doubted the claims made by proper academics that Wikipedia is the world’s worst encyclopedia full of fake news and bogus, biased claims made by dishonest fabricating fanatics who've found their niche amongst cultish, obtuse, idiots then please read on.
Examining the archived  Wikipedia page on Patrick Matthew you’ll find the most hilarious endlessly obsessive nonsense written - mostly by the whack job obsessed stalker who pretends to be professionally affiliated to Edinburgh University (but isn't) Julian Derry who repeatedly cites the ludicrous falsehoods written by Darwin fanatic  Dr Dagg in nothing more than his anti-academic blog site in non-peer reviewed ludicrous hatchet job blog posts created by his own dishonesty and lies. Dagg is so jealous of my unique discoveries that he even blatantly plagiarised (see the facts here) my original bombshell discovery that Wallace's Sarawak paper editor editor Selby, who was also a friend of Charles Darwin's father and Darwin’s great friend, Jenyns, cited Matthew's (1831) book and the ideas in it in 1842.
The Wikipedia Matthew  page cites a totally disingenuous fact denial and Darwin rambling desperate deification tract written by Malec, but fails to cite my fact-based refutation response to Malec's disingenuous nonsense in the very same journal (here). (archived here). How biased is that?
By way of just one more example amongst all of Derry and Dagg's totally fabricated lying nonsense on this Wikipedia page about me mistaking things for things they are not (note in my 2014  e-book, Nullius. I don't mistake the publications for anything other than what they are. Namely, published sources that are independently verifiable as named publications.  I only ever say these are the first currently discovered/now known places the terms, words or phrases are used that were either perhaps overheard thereafter, or more likely than not read by those who were apparently first to be second in using them).

Moreover, Dagg the Plagiarist wrongly claims (because he makes a habit of being either dishonest, maliciously fraudulent or plain wrong throughout his Darwin deification work) that I made a mistake in discovering a Matthewism later used by Selby. Dagg, credulously cited on this particular falsehood in Wikipedia by his co-nutter, lazy academic failure and obsessive and delusional Wikipedia editor, Derry, wrongly co-claims Selby did not even use the term "greater power of occupancy". In reality, the total 100% proven and independently verifiable fact is that I originally found Selby was apparently first to be second with it in published print. The image below is of my List 2 published in my 500 page e-book (Sutton 2014) Nullius in Verba: Darwin's greatest secret. 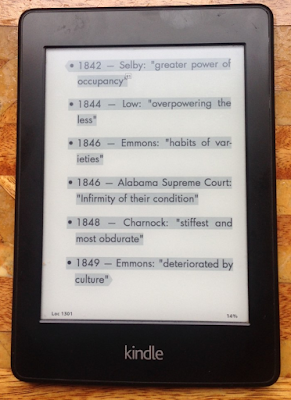 The falsehood created by Dagg and replicated on Wikipedia that Selby never used the term 'greater power of occupancy' is just one amongst all of Dagg and Derry's mere blog post fact denial falsehoods. Because you can independently verify here that it is used in the very source I cite in my e.book along with an image of the term in my e-book on my Kindle. Click here to see that the term IS in Selby's (1842) book A History of British Forest-trees: Indigenous and Introduced, on page 391.
Wikipedia has done the world a great service in allowing these Darwin worshiping vacuous morons to edit its page with their comprehensive dog’s breakfast fake facts malicious attack on the discoverer of painful and independently verifiable truths. They have provided the world with wonderfully concentrated proof of just how useless, dishonest and totally biased Wikipedia is.

Ultimately, fact denial fake news about scientific and other discoveries of the kind published by gleefully imbecilic Wikipedia editors will cost lives. If you think that is an exaggeration then please read my blog post on the Crime Talk site: Here
Posted by Dysology at 05:29 No comments:

Bullshit in Science and the History of Science Kills People

We are all in is a massive Pandemic of Bulls#it

On the Crime Talk site, I argue why I think the answer is yes, they are! @DrMarkGriffiths @EdzardErnst https://t.co/uPXibahT7C pic.twitter.com/LD7ZkManf8

Posted by Dysology at 11:55 No comments:

Another candidate for the Patrick Matthew Awards 2020. Category for the World's Greatest Irony

Solidarity with the brilliant @DrJessTaylor, who is being subjected to horrendous abuse by men committed to misogyny at all costs. This only shows the importance of her work, which these men could learn so much from were they to actually engage with it... https://t.co/RcBMWrASHT

Posted by Dysology at 07:08 No comments:

Email ThisBlogThis!Share to TwitterShare to FacebookShare to Pinterest
Labels: The Matthew Awards

Got 11 videos sent to me of screws dancing outside prisons! All videod in last 6 days in which time 13 deaths in custody and 218 confirmed cases and counting. Ill put them all up later for your pleasure guys #prisonerspeopletoo pic.twitter.com/EXRWgiao4V

No masks. No social distancing. If genuine, here we would see an example of Patrick Mathew's (1831) "Natural process of selection" in action during a pandemic. #TheMatthewAwards https://t.co/I8BK3UCf8x

Posted by Dysology at 07:11 No comments: