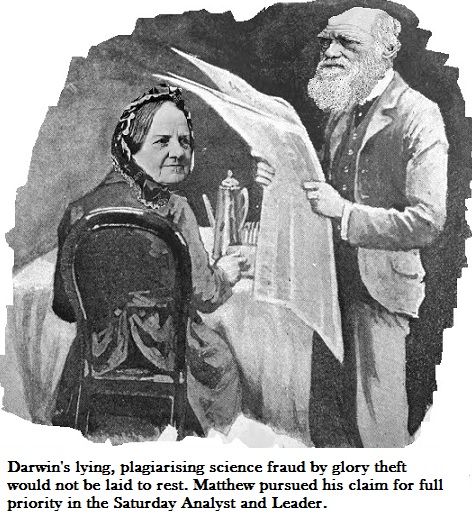 Don't unthinkingly go along with the zombie hoard of myth parroting Darwinite mynah birds, who simply repeat whatever their heroes tell them is so. Because the independently verifiable disconfirming facts for the fallacy that Matthew was content with Darwin's reference to his prior publication in the third edition of the Origin of Species (Darwin 1861), and  in every edition thereafter, are 100 per cent proven to exist by simple virtue of being in print in the independently verifiable 19th century publication record:

'Sir,— The conduct towards me of the soi-disant British Association for the Advancement of Science has been such that I consider it right to lay the subject before the public. I gave in to their Assistant-General Secretary nine papers to be read. Of these they rejected seven and admitted two, one of the latter, on Botany, I withdrew, as I thought it required the rejected to appear along with it.

The other I did not withdraw, as it had an immediate importance, but which the Society managed, by delaying the reading till the last, not to read.I will match the importance of these nine papers, in a national point of view, against all that was read at the Dundee meeting, of which the public will have an opportunity to judge. With regard one of these papers, on what is termed Darwin’s Theory of Natural Selection, but which theory was published by me about thirty years before Darwin (honourably acknowledged in his last edition by Darwin), at a time when man was scarcely ready for such thoughts, I surely had the best right to be heard upon this subject. Yet others were allowed to speak upon it, and its parent denied to do so. Such is the conduct of a Society terming itself the British Association for the Advancement of Science.— l am, &c.,' 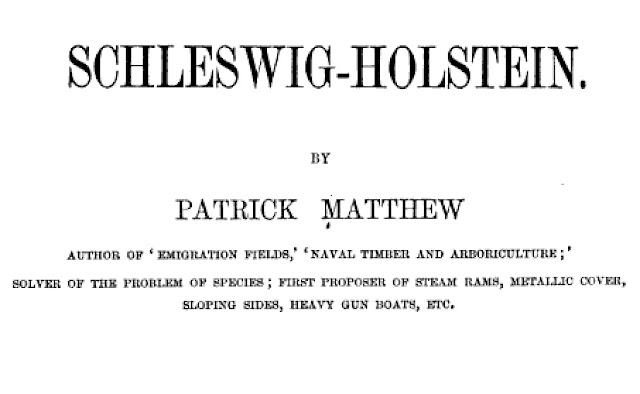 "In spite of my father's recognition of his claims, Mr. Matthew remained unsatisfied, and complained that an article in the 'Saturday Analyst and Leader' was "scarcely fair in alluding to Mr. Darwin as the parent of the origin of species, seeing that I published the whole that Mr. Darwin attempts to prove, more than twenty-nine years ago."—Saturday Analyst and Leader, Nov. 24, 1860.

Darwin got away with plagiarism and was able to "crankify" the originator, Matthew, because he was supported in that self-interest glory thieving endeavour by many influential peers - such as Charles Lyell, the Hookers of Kew and David Anstead who were prepared to sink to great depths to deceive the scientific community and wider society on his behalf (see Sutton 2014).

Why was Darwin so Revered?


Why has the Darwin and Wedgwood family (into which Darwin married via his first Cousin Emma) been so honored by the mighty Royal Society - having at least 10 family members receiving prestigious fellowships? Why does the Royal Society refuse to accept the originator Patrick Matthew as having full and complete immortal great thinker, influencer and originator status over Darwin and Wallace for his own prior published, and pre-1858 cited, conception of macroevolution by natural selection?

'I would be happy to explain to you what is the point of exploring the evidence regarding who deserves credit for an idea such as natural selection. The point is the same as for any other idea: as a scholar, one wants to get this right, because correct attribution is an important part of the social fabric of scholarship, including science. The correct source for natural selection, under the normal rules of attribution, is Patrick Matthew. If, instead, everyone decides to give credit to some revered figure who came in second-place, then this diminishes scholarship and science, and makes it into more of an elite popularity contest. Here's a rhetorical question for you: would you like credit to go to scientific royalty, or would you like science to be more of a meritocracy?

Everyone agrees that Darwin had more influence. There is no difficulty in adjusting our language to respond to this fact, e.g., consider the case of the Modern Synthesis. Mayr, Simpson and Dobzhansky clearly were the most influential in promoting modern neo-Darwinism, but we attribute the actual combination of Darwinism and genetics to Fisher, Haldane and Wright. We could simply refer to Darwin in the same way-- we could say that natural selection was proposed by Matthew, and perhaps Wells, then popularized by Darwin and his influential social circle.

However, what has happened in this case is that, when the evidence that contradicts misinformation peddled by Darwin and his followers is brought forth, Darwinian zombies lurch forward with the same ignorant dismissals, non sequiturs, and so on, which are then cut down, which just makes room for the next wave of zombies.

'OMG, this is not an "extraordinary claim"! First of all, it is not a claim about evolution, but a claim about scholarship regarding evolution. This is just one of a gazillion cases in which a particular claim with scarcely any foundation is repeated until it becomes part of orthodoxy, e.g., read Ghiselin about how evolutionary biologists endlessly repeat the false trope of a conflict between Lamarck and Darwin.

Literally, if we stack up the evidence in the two pans of a balance, on one side *all we have* is Darwin's assertion that naturalists can all be excused for not noticing Matthew's ideas because they appeared only in the appendix of a book on naval arboriculture.

Then, there is evidence on a further point: we know that Matthew informed Darwin that, in fact, naturalists had read the book, and we know that Matthew provided verifiable evidence, i.e., he pointed to a citation. If Darwin had cared to ascertain the truth that Loudin reviewed the book, he could have verified Matthew's claims. Matthew made a second, more obscure, claim about an anonymous colleague who was afraid to repeat his radical views, but there was no way for Darwin to verify this.

In science, a statement backed by citing a source trumps a mere assertion.
[I'm not sure if this is still true, but there was a time when ACS journals instructed reviewers that they could not contradict an author's referenced statement without providing a citation. ] When Matthew wrote his open letter to Darwin citing a source that contradicted Darwin's claim, Darwin was officially trumped. The proper response would have been to rebut Matthew's evidence, or else to retract or withdraw the claim.

The incredible amount of heat being generated here is not an indication that this is some kind of extraordinary unicorn-in-the-garden claim. It is simply a sign that Sutton has committed lese majeste, and the defenders of scientific royalty are coming out to defend His Majesty King Darwin.

This behavior has become a major curse on evolutionary biology. We're all going to pay a price for the generations of short-sighted hero-worshipping evolutionary biologists who built a brand identity on the reputation and status of a dead person whose views would by no means survive today.'