What follows is the pertinent timeline of what was written by Matthew and Darwin about who read Matthew's prior published discovery of natural selection.

1. In 1860 in his first letter to the Gardener's Chronicle, to claim his rightful priority for his prior published hypothesis of natural selection, which Darwin replicated without citing him, Matthew wrote that his book had been reviewed by the famous naturalist botanist John Loudon.

‘One of the subjects discussed in this appendix is the puzzling one, of the origin of species and varieties; and if the author has hereon originated no original views (and of this we are far from certain), he has certainly exhibited his own in an original manner.’

'In your Number of March 3d I observe a long quotation from the Times, stating that Mr. Darwin "professes to have discovered the existence and modus operandi of the natural law of selection," that is, "the power in nature which takes the place of man and performs a selection, sua sponte," in organic life. This discovery recently published as "the results of 20 years' investigation and reflection" by Mr. Darwin turns out to be what I published very fully and brought to apply practically to forestry in my work "Naval Timber and Arboriculture," published as far back as January 1, 1831, by Adam & Charles Black, Edinburgh, and Longman & Co., London, and reviewed in numerous periodicals, so as to have full publicity in the "Metropolitan Magazine," the "Quarterly Review," the "Gardeners' Magazine," by Loudon, who spoke of it as the book, and repeatedly in the "United Service Magazine" for 1831, &c. The following is an extract from this volume, which clearly proves a prior claim.  ...'

Loudon was a famous naturalist, Yet in his 1860 reply to Matthew's 1860 letter Darwin wrote the exact opposite to what Matthew had just told him. See point 2, immediately below, for the hard evidence.

" I think that no one will feel surprised that neither I, nor apparently any other naturalist, had heard of Mr Matthew's views, "

To necessarily repeat the point already made, Darwin wrote the exact self-serving opposite to what Matthew had just informed him.

3. Naturally concerned that Darwin was denying the truth about the fact that his book had been read by other naturalists, and its unique ideas understood,  Matthew (Matthew, P. 1860b. Letter to the Gardeners Chronicle. Nature's law of selection. Gardeners' Chronicle and Agricultural Gazette (12 May) p. 433.)  then very clearly, in his second letter in the Gardener's Chronicle - by way of reply to Darwin's blatant self-serving lie  - wrote:

'I notice in your Number of April 21 Mr. Darwin’s letter honourably acknowledging my prior claim relative to the origin of species. I have not the least doubt that, in publishing his late work, he believed he was the first discoverer of this law of Nature. He is however wrong in thinking that no naturalist was aware of the previous discovery. I had occasion some 15 years ago to be conversing with a naturalist, a professor of a celebrated university, and he told me he had been reading my work “Naval Timber,” but that he could not bring such views before his class or uphold them publicly from fear of the cutty-stool, a sort of pillory punishment, not in the market-place and not devised for this offence, but generally practised a little more than half a century ago. It was at least in part this spirit of resistance to scientific doctrine that caused my work to be voted unfit for the public library of the fair city itself. The age was not ripe for such ideas, nor do I believe is the present one,..'

4. Despite being initially informed that the naturalist Loudon had read and reviewed his book Darwin lied in his letter of reply in the Gardener's Chronicle by writing that no naturalist had read Matthew's ideas. As can be seen in point 3, above, Matthew then corrected Darwin by informing him in detail of yet another naturalist who had read his original ideas on natural selection but was afraid to teach them for fear of pillory punishment. Matthew informed Darwin also of the significant fact that his original ideas had been read and his book banned by Perth public library in Scotland (Matthew referred to Perth by its Scottish pet name the Fair City).

The following year, in possession of  facts that refuted his fallacies about the readership of Matthew's book, Darwin  wrote to a famous and influential naturalist with the self-serving lie that no one at all had ever read Matthew's book! To the famous French naturalist Quatrefages de Bréau in his letter of April 25, 1861 Darwin wrote::

"I have lately read M. Naudin's paper; but it does not seem to me to anticipate me, as he does not shew how Selection could be applied under nature; but an obscure writer on Forest Trees, in 1830, in Scotland, most expressly & clearly anticipated my views—though he put the case so briefly, that no single person ever noticed the scattered passages in his book."

' Unfortunately the view was given by Mr. Matthew very briefly in scattered passages in an Appendix to a work on a different subject, so that it remained unnoticed until Mr. Matthew himself drew attention to it in the Gardener's Chronicle,' on April 7th, 1860.'

Small wonder then that Darwin's Darwinist's - being named for their lying hero - failed to check the truth of the matter. By way of example, Sir Gavin de Beer - Royal Society Darwin Medal winner - wrote in his Wilkins Lecture for the Royal Society (de Beer 1962 on page 333): Darwin's great lie as the "gospel according to Darwin" truth. Until I personally put the record fully straight not a single person corrected his credulous Darwin deification claptrap:

"...William Charles Wells and Patrick Matthew were predecessors who had actually published the principle of natural selection in obscure places where their works remained completely unnoticed until Darwin and Wallace reawakened interest in the subject.' 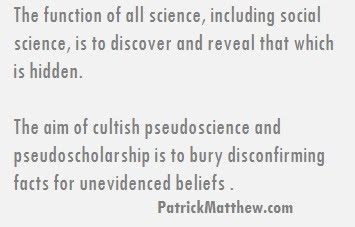 Darwin was a self-serving deliberate liar. The record is independently verifiable. Darwin wrote the very opposite to what he had twice been informed was the truth by the very trustworthy originator whose ideas he replicated without citing their originator's prior publication of them. And Darwin wrote those falsehoods - because  - just as de Beer's ludicrously acclaimed text goes to prove- they were needed to wrestle priority away form the true biological father of natural selection.

Had the powerfully connected and much revered Charles Darwin , responded in writing, in the Gardener's Chronicle and from the third edition of the Origin of Species onward, for the historical record with honestly, to the correct and honest information supplied by Matthew – as opposed to writing the opposite to it in a series of deliberate Matthew suppressing lies – the history of discovery of natural selection would be a veracious record and it would be called Matthewism, not Darwinism. Clearly, today, Darwinists, named for Darwin, have a professional academic and ‘Darwin Industry’ interest in saving face and seeking, wormingly, to wriggle-deny by any embarrassing means at their desperate disposal, this obvious – fact-led truth. The shame of it.

Email ThisBlogThis!Share to TwitterShare to FacebookShare to Pinterest
Labels: liar