Before the publication in 2014 of the first edition of my book 'Nullius in Verba: Darwin's greatest secret'  Darwinists have been misleading the public and other scholars into believing that Patrick Matthew's full prior published (in 1831) hypothesis of natural selection was unread by anyone in the field who mattered before Matthew brought his book to Darwin's attention by way of the first of two letters he had published in 1860 in the Gardener's Chronicle.

Even my personal Darwinist hero, Jim Dempster, the man Richard Dawkins (2010 in Bryson (Ed.)) calls Patrick Matthew's champion, was misled by the Darwinist literature, and a failure to discover the truth, into believing (Dempster 1983 'Patrick Matthew and Natural Selection' p. 21):

"Matthew's book and its Appendix went unread except by a few reviewers who praised it.'

In 1983, what Dempster wrote  was an easily discovererable fallacy, because it runs counter to what Matthew (1862) wrote to Darwin in his second letter to to the Gardener's Chronicle about an unnamed naturalist who had read his original ideas on natural selection but feared to teach them for fear of pillory punishment. Moreover, Dempster's claim was also even more erroneous, but only so in light of the fact that it is newly discovered (Sutton 2014) that, outside and beyond book reviews, quite a few others did, in fact, read Matthew's book, cite it, and mention the original, yet heretical, ideas in it. Among that number we can count Loudon who, after his 1832 review of Matthew's 1831 book, cited the same book many more times in books on trees and gardening and botany. Before my research everyone appears to have failed to realize that Loudon was a naturalist. Furthermore, I uniquely discovered that, including him, seven naturalists read and cited Matthew's 1831 book before 1858. They are: Loudon, Chambers, Murphy, Johnson, Selby, Norton and Jameson.

The year before Dempster's classic book on Matthew, another top Darwinist - widely proclaimed to be on of the 20th century's leading evolutionary biologists, Ernst Mayr published a more specific fallacy abut Matthew's book and the unique ideas in it going unread by those who mattered.  (Mayr 1982 The Growth of Biological Thought: Diversity, Evolution and Inheritance . p.499)

'The person who has the soundest claim for priority in establishing a theory or evolution by natural selection is Patrick Matthew (1790-1874). He was a wealthy landowner in Scotland, very well read and well traveled (Wells 1974). His views on evolution and natural selection were published in a number of notes in an appendix to his work On Naval Timber and Arboriculture (1831). These notes have virtually no relation to the subject matter of the book, and it is therefore not surprising that neither Darwin nor any other biologist had ever encountered them until Matthew bought forward his claims in an article in 1860 in the Gardener's Chronicle.'

Biologists include  zoologists, botanists, ornithologists, malacologists, naturalists and other specialties - and the Oxford English Dictionary (OED) dictionary definition of what constitutes a biologist has it that a biologist is an expert, specialist or student in biology, and the OED also has it that biology is 'The branch of science that deals with living organisms as objects of study, apart from any utilitarian value they may have, and now comprising more specialized disciplines such as zoology, botany, and bacteriology.' Therefore, Loudon (1832), Chambers (1832), Murphy (1834), Johnson (1842), Selby (1842), Norton (1851) and Jameson (1853) were most certainly all biologists. Indeed  (for what it is worth) Loudon and Selby are listed as such in the Wikipedia page of famous biologists.

The most highly esteemed Darwinist Ernst Mayr is today also proven to have been 100% wrong about the readership of Matthew's book. He is proven wrong by the newly discovered facts fist published in Nullius, because Mathew's 1831 work in fact was read by other biologists. And Loudon (a biologist) - who everyone - including Mayr - seems to have failed to realize was a naturalist (and therefore, being one who studied and wrote about the evolution of animals and plants, as well as geology, that makes him a biologist) until the publication of my work Nullius  in 2014, we can be sure definitely read Matthew's appendix, because Loudon commented upon the original ideas in it by noting that it appeared to have something original to say on what he referred to as 'the origin of species' no less!

Furthermore, it is important to note that Mayr - like so many Darwinists - misleads his readers by failing to mention that Matthew's (1831) original ideas on natural selection were not merely contained in the notorious appendix. As the excerpts included in Matthew's first 1860 letter to Darwin in the Garderner's Chronicle prove - his original ideas on natural selection were also in the main body of his book. And ideas from these were mentioned - albeit  briefly -  by Selby (1842) and Jameson (1853) - both can most certainly be deemed to be naturalists and biologists.

As I explained in an earlier blog,  but not earlier than Dempster's and Mayr's work where both read and cited the work that contains de Beers's fallacious claim with no comment upon it - Royal Society Darwin Medal winning Darwinist expert Sir Gavin de Beer (1962) wrote the following absolute claptrap:

'…William Charles Wells and Patrick Matthew were predecessors who had actually published the principle of natural selection in obscure places where their works remained completely unnoticed until Darwin and Wallace reawakened interest in the subject.’

As I explain in depth in Nullius, and have explained in an earlier blog post (Sutton 2015), these fallacies about Matthew's prior published discovery of natural selection being unread were started by Darwin as deliberate lies in the Gardener's Chronicle in 1860 and from the third edition of the Origin of Species onward.

For more original and newly discovered concrete facts that bust Darwinist claptrap, and in so doing drag the vexatious anomaly of Darwin's and Wallace's self-serving claims to have discovered natural selection independently of Matthew's (1831) prior published hypotheses, and independently of those naturalists they knew who actually cited it before they replicated it, under the spotlight of veracity as a ludicrously biased Darwin worshiping belief in a completely unique and paradoxical dual miracle of immaculate conception of a prior published hypothesis - you could do worse than read Nullius in Verba: Darwin's greatest secret. For instance, you might alternatively - if you don't care for hard and independently verifiable facts - read anything at all written on the topic by a top Darwinist! 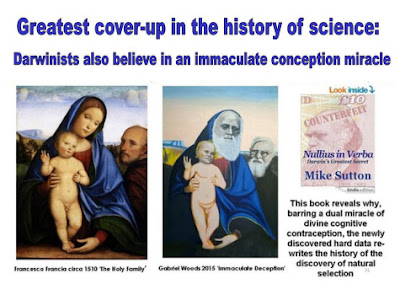