Darwin the Liar - or "Inventor" of Falsehoods about Patrick Matthew.

From: The Autobiography of Charles Darwin by Charles Darwin
"Invention"! That's ironically true. Darwin is newly proven a self-serving serial-lying plagiarist
Darwin wrote in his autobiography:
'Therefore my success as a man of science, whatever this may have amounted to, has been determined, as far as I can judge, by complex and diversified mental qualities and conditions. Of these, the most important have been—the love of science—unbounded patience in long reflecting over any subject—industry in observing and collecting facts—and a fair share of invention as well as of common sense. With such moderate abilities as I possess, it is truly surprising that I should have influenced to a considerable extent the belief of scientific men on some important points.' 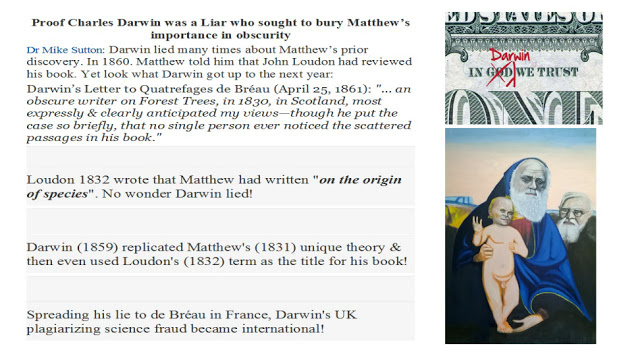 For 155 years, top Darwinists have - to their eternal shame - credulously believed and so trumpeted as true Darwin's self-serving lie about the originator of natural selection. They did so in order to be able to make themselves believe that Darwin and Wallace discovered natural slection independently of Matthew's (1831) original and prior published book containing it. Today, despite the fact I have 100 proven Darwin a liar and 100 per cent proven that top naturalists known to Darwin  and Wallace did read Matthew's 1831 before they replicated so much of its original content in 1858, Darwinists such as James Moore have willfully refused to engage with the paradigm changing New Data. Perhaps that is to be expected. After all, they are named for a proven serial lying replicator, and their top Royal Society Darwin medal winning Darwinist guru's, such as Sir Gavin de-Beer, are proven to be credulous believers in Darwin's sneaky lies.

Email ThisBlogThis!Share to TwitterShare to FacebookShare to Pinterest
Labels: Darwin the liar