Mythbusting is rather like playing the card game "Donkey".

When you are done, if the facts refute the main claim , then all that is left is a braying donkey insisting that the claim is still valid. Today, the facts reveal that Darwin scholars are nought but braying donkeys. 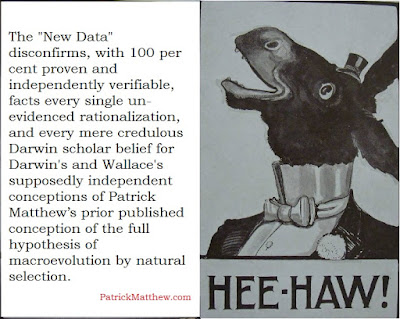 The "New Data" facts, which the powerful "Dawin Deification Lobby" are seeking to suppress by engaging in classic "fact denial tactics" to mislead the public, have made it into a peer reviewed science journal. Read the latest peer reviewed science paper that proves Darwin lied, plagiarised and was most likely highly influenced by Patrick Matthew.  Here