Myths About Darwin (No, 4) The Darwin Got It but Matthew Never Extinction by Natural Selection Myth

According to William D Stansfield (1977) The Science of Evolution. Newy York. Macmillan,

'I feel as if my book (Origin of Species) came half out of Sir Charles Lyell's brain.'

This is totally wrong. Darwin's Origin of Species was not published untill 1859. The closest Darwin got to writing what Stansfield claims is in an 1844 letter to Leonard Horner:

'I always feel as if my books came half out of Lyell’s brains & that I never acknowledge this sufficiently, nor do I know how I can, without saying so in so many words—for I have always thought that the great merit of the Principles, was that it altered the whole tone of one’s mind & therefore that when seeing a thing never seen by Lyell, one yet saw it partially through his eyes— it would have been in some respects better if I had done this less—but again excuse my long & perhaps you will think presumptuous discussion.'

We should expect as much complete nonsense because there is so much of it in the Darwin deification industry. So Stansfield confirms the Dysology hypothesis, and it is not long before examples pop out of his book as further confirmation of the general acceptance of falsehoods about Patrick Matthew's influence, and the contents of his 1831 book, by the scientific community.

Dysology about Matthew has facilitated the enabling environment that enabled Stansfield to to get away with writing so much more nonsense to be published for consumption as though it were true. And his completely erroneous nonsense is published by the prestigious Macmillan publishing house, no less!

Clearly Stanstead had no more read Darwin's original correspondence than he had carefully read Matthew's (1831) original  book. Because on page 32 he writes:

This is yet another Darwinite myth, told to enhance Darwin's reputation at the expense of the originator whose work he replicated. In reality, on page 381 of his 1831 book On Naval Timber, Matthew wrote: 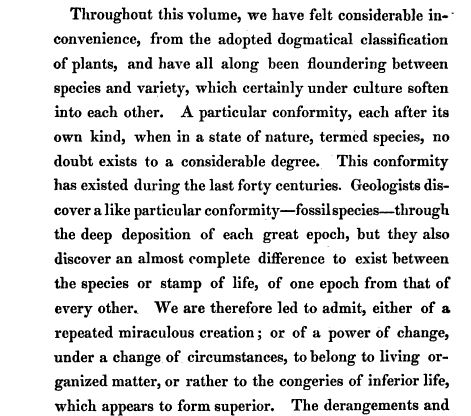 Note that here Matthew is mocking the notion of divine interference in the creation and extinction of species: "Discover an almost complete difference to exist between the species... of one epoch from that of every other." And "...admit, either of repeated miraculous creation; or a power of change,..." Now, if Matthew is not explaining the role of natural selection to create new species though a power of change then I am one of the amazing golden unicorns that gave Darwin and Wallace their miraculous cognitive contraceptives!

'From the third edition of the Origin onwards, Darwin (1861), a follower of Lyell’s erroneous uniformitarianism, jumped at the chance to bolster Lyell’s theory and denigrate Matthew by referring to him as a catastrophist. Dempster made this injustice abundantly clear. Punctuated equilibrium — essentially Matthew’s discovery — is accepted in science today but, as Dempster noted, its Darwinist purveyors sought to keep the originator of that theory buried in footnote oblivion. In a more well-known account, Rampino explains just some of the detail conveyed by Dempster'