My original research first published in Nullius (Sutton 2014) revealed that, as opposed to the prior widely held 'knowledge belief' that it went unread until 1860, that at least 25 individuals (seven of whom were influential naturalists - four known to Darwin/Wallace - three who influenced and facilitated their pre-1858 work on natural selection)  read and then cited Matthew's (1831) book, containing the full hypothesis of natural selection, before 1858 - which is the date Darwin's and Wallace's replications of Matthew's ideas (without citation of Matthew) were first published.

In 2015 Dr Mike Weale discovered on additional individual - bringing the known total to 26:

This brief citation is noteworthy for confirming that Matthew’s book was regarded as “valuable” by the author of the 1842 Encyclopaedia Britannica article on “Timber”. Note that Volume 21 really was published in 1842, unlike the other volumes which although they stated “1842” on their title pages were in reality published in earlier years. The article is signed “(B.Z.)”, identifiable as Augustin F. B. Creuze (1800-1852) via the Table of Signatures in Volume 1. Creuze also authored other articles for the Encyclopaedia Britannica, including a lengthy one on “Ship-building” that was published as a separate treatise, but Matthew is not cited in it. The article reproduces a table from Matthew’s book on the “number of concentric layers of sap-wood”. The citation is also noteworthy for making a reference to the “many things irrelevant to its subject” in the book. A similar opinion was expressed in the 1860 review of the book, likely by James Brown.

The following table of the number of concentric layers of sap-wood observed in various species of timber trees is extracted from a valuable work on Naval Timber by Patrick Matthew; a work which abounds in much sound practical information, though mixed up with many things irrelevant to its subject.

Moreover, in Nullius I originally revealed also that Matthew's (1831) book was advertised on 3/4 of a prominent page of  Part 5, Volume 2 of the Encyclopedia Britannica 1842.

We must add Creuze to the list of scholars - who we newly know read Matthew's book before 1858 -  whose private journals and correspondence are worthy of further research to see whether, and with whom,  they discussed Matthew's ideas before 1858. 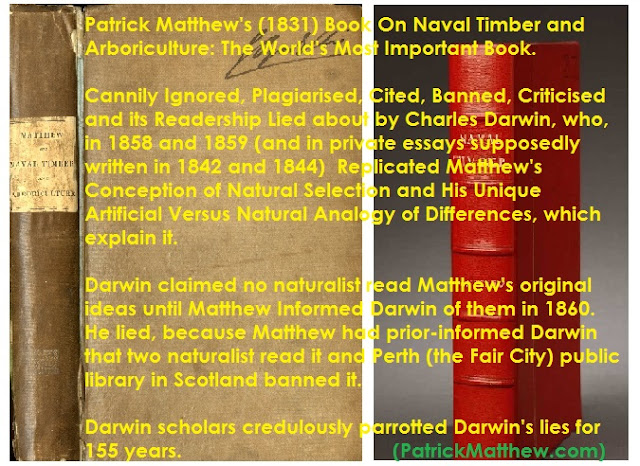