Perth Public Library Banned the Most Important Book in the World

On April 21st 1860 The Gardener's Chronicle published Matthew's second letter on the topic of his claim to priority for his (Matthew 1831) prior-published discovery of natural selection.

In this letter, Matthew responded to Darwin's letter of reply to his first letter in the Gardener's Chronicle. Darwin's letter of reply contained Darwin's lie that no naturalist had read Matthew's ideas before Darwin claimed to have independently discovered and then published them in 1859, which was his excuse for replicating them without citing Matthew. Of course, it is now newly discovered that seven naturalists did read and then cite Matthew's book pre-1858 and that Darwin/Wallace knew four of them and three (Loudon, Chambers and Selby) played major roles at the epicentre of influence and facilitation of the work of Darwin and Wallace (see Sutton 2014).

'I had occasion some 15 years ago to be conversing with a naturalist, a professor of a celebrated university, and he told me he had been reading my work “Naval Timber,” but that he could not bring such views before his class or uphold them publicly from fear of the cutty-stool, a sort of pillory punishment, not in the market-place and not devised for this offence, but generally practiced a little more than half a century ago. It was not least in part this spirit of resistance to scientific doctrine that caused my work to be voted unfit for the public library of the fair city itself.' 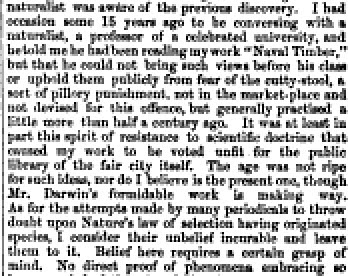 As Dempster explains in his excellent book the "fair city" is the nickname Scots give to the city of Perth. It has been called that since the publication of Sir Walter Scott's (1828) book 'The Fair Maid of Perth'. And there is only one 'fair city' in Scotland.

Here then, we can see that in addition to the fact that from his first letter, and now from this second published letter, Darwin was informed by Matthew himself that the original ideas on natural selection in Matthew's book had in fact been read (not unread by anyone  as the modern myth has it) but by two naturalists - John Loudon and an unnamed naturalist professor. This factual information puts into perspective the pseudo-scholarly  nonsense written by Darwinists that Matthew never understood what he had discovered because he never 'trumpeted it's heresy from the rooftops' in the first half of the 19th century (e.g. see here).

I wonder if any other public libraries elsewhere in world also banned Matthew's heretical and seditious book?

You can view a Prezi presentation on Darwin's lying, plagiarising science fraud by glory-theft here

Full second Matthew letter to Darwin  from the Gardener's Chronicle 1860.