The Day the Supposedly Obscure Writer, Patrick Matthew's Book "Emigration Fields" was Recommended Reading Material for Captain Fitzroy of the Beagle. No less!

(See red arrow at bottom of the second image below)

Charles Darwin - whilst penning a deliberate lie to a famous French biologist was later to refer to Matthew as merely an obscure writer on forest trees:

Letter from Darwin to Quatrefages de Bréau in his letter of April 25, 1861 Darwin lied:

"I have lately read M. Naudin's paper; but it does not seem to me to anticipate me, as he does not shew how Selection could be applied under nature; but an obscure writer on Forest Trees, in 1830, in Scotland, most expressly & clearly anticipated my views—though he put the case so briefly, that no single person ever noticed the scattered passages in his book."

Seventeen years before Darwin portrayed Matthew as an obscure writer and in the same year Darwin claimed to have written a mere private essay on natural selection, Patrick Matthew's second book is recommended in the press to none other than the man for whom Charles Darwin was,employed to be expedition geologist and table companion for Captain Robert Fitzroy of the HMS Beagle.

Matthew's (1839) book was recommended to Fitzroy following news of his appointment as Governor of New Zealand. 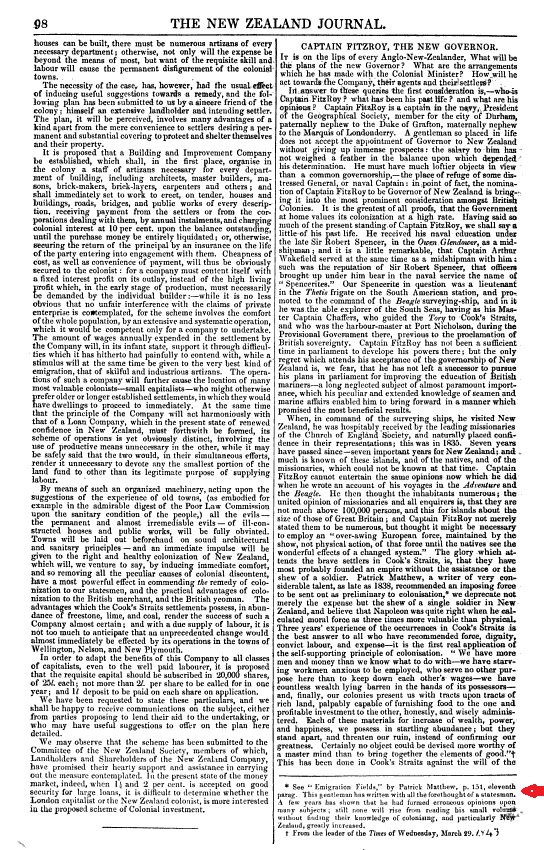 In his (1839) book 'Emigration Fields' - and contrary to Darwinist mythology that he never developed his ideas on natural selection after is origination of them 1831 - Matthew, in actual fact, took his original ideas on natural selection, and the importance of those ideas for propagating naval timber, and for addressing the artificial selection problems caused in human society, forward for the human species. Matthew did this in his 1839 book, in particular for the Anglo Saxon variety of human known generally as British. On the opening pages of  his book Emigration fields, we see Matthew's (1831) On Naval Timber and Arboriculture was promoted. 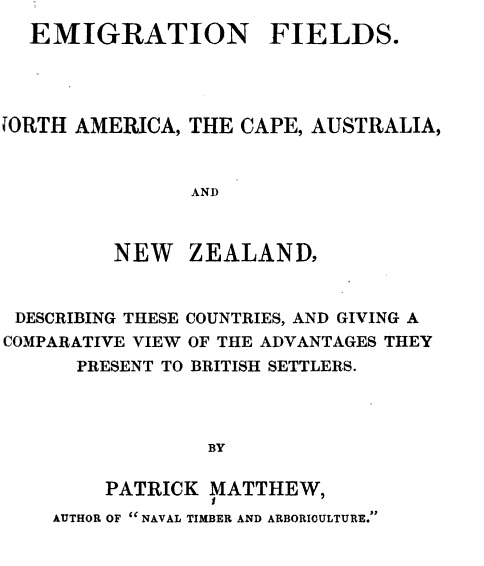 Darwin labelled Matthew an obscure writer on Forest Trees as jut one part of the classic response process of those in a 'state of denial' of the uncomfortable facts. It's known as 'victim blaming'. That move was simply another of several sly Darwin-penned fallacies that were written to put others off the scent of the truth.

Darwin's obscure writer on forest trees excuse, was greatly aided and abetted by the fallacies written by the botanist John Lindley (best friend of the father of Darwin's best friend Joseph Hooker), which for 13 years concealed the fact that Patrick Matthew and his son John were the first to bring the greatly admired giant redwood tree seeds into Britain and propagate the trees in Scotland. Thanks to the fallacy spreading of the immensely powerfully connected Professor Lindley, he and Lobb received adoring credit by naturalists until the myth was bust by publication of the facts - but only a full year after Lindley's death in 1865. Moreover, I uniquely and originally discovered in January 2016 that John Matthew named the trees Wellingtonia six months before Lindley is officially accredited with the botanical naming. Furthermore, I discovered that Lindley was in possession of an abstract of a letter (and possibly the whole letter) that disproved his and Lobb's fallacious claim to Matthew's glory as least six months after he made it, but possibly six months before!

In 1860, Charles Darwin created four fallacies about Matthew. Darwin scholars turned them into myths by blindly parroting those fallacies as the gospel truth. They parroted them as though they represent valid reasons why Darwin replicated Matthew's original ideas, terminology and explanatory examples, 27 years after Matthew's book was published, without citing their original published source.

Darwin claimed Matthew had no influence on him or anyone else. He supported that claim by writing the fallacy that no one read Matthew's ideas before 1860. In reality, influential naturalists around Darwin, who influenced him on the topic of organic evolution, either read Matthew's book and cited it (Chambers), or else read and cited it before then editing the work of those who influenced Darwin and Alfred Wallace (Selby and Loudon).

Darwin's four fallacies about Matthew and his book: Blindly parroted by credulous Darwin scholars for 155 years as excuses for Darwin and Wallace not citing it.

1. The lie that Matthew buried all his ideas on natural selection in the appendix of his book. (See The Appendix Myth)
2. The lie that no naturalists / no one at all read Matthew's original ideas on natural selection before 1860. (See the 100 per cent disconfirming proof).
3. The fallacy that Matthew was merely an obscure writer on forest trees. (Besides the evidence presented in the blog post you are currently reading, see Matthew's extensive publications on the Patrick Matthew Project website). By way of just one further example see the blog post where it is revealed that Matthew's book was prominently advertised and then cited in the Encyclopaedia Britannica of 1842 (the very year Darwin claimed to have first penned his first private essay on natural selection). The discovery of this significant evidence is originally in  Nullius (Sutton 2014): 'In the same year that Darwin finished his first unpublished essay on natural selection, Black [Matthew's Scottish publisher] ensured that NTA [Naval Timber and Arboriculture] was advertised across three quarters of an opening page in the Encyclopaedia Britannica (1842), with considerable mention made of Matthew's unique ideas on the issue of species and variety'. See image below of that block advertisement.
4. The fallacy that a book entitled 'On Naval Timber and Arboriculture' was too inappropriate and obscure to contain the first publication of the unifying theory of biology. (Read about the huge importance attributed by the Royal Society to Evelyn's classic book on the exact same theme).