Having deleted the myth started as a lie by Darwin that no naturalist / no one whatsoever read Patrick Matthew's (1831) prior published theory before Darwin and Wallace replicated it and claimed it as their own, I am pleased to see that the Encyclopedia Britannica has now also deleted the Appendix Myth from its page on Patrick Matthew.  The encyclopedia could benefit form making it clearer that whilst it is correct (e.g. see Rampino) that Matthew's catastrophic extinction events version of the theory is more correct than Darwin's now debunked uniformitarian beliefs, Matthew also explained evolution by natural slection occurring between extinction events:

‘…diverging ramifications of life, which from the connected sexual system of vegetables, and the natural instincts of animals to herd and combine with their own kind, would fall into specific groups, these remnants in the course of time moulding and accommodating their being anew to the change of circumstances, and to every possible means of subsistence, and the millions of ages of regularity which appear to have followed between the epochs, probably after this accommodation was completed affording fossil deposit of regular specific character.’ 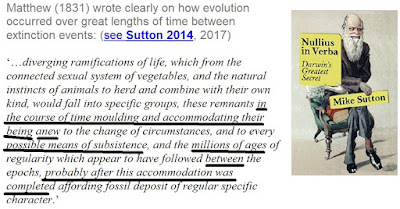 PLEASE NOTE The (Sutton 2014) e-book of Nullius in Verba Darwin's greatest secret (CITED BELOW) is currently unavailable due to criminal and civil book piracy investigations into hackers, cyberstalkers and ID fraudsters (see bottom of page at PatrickMatthew.com on the original e-book) However, the abridged (vol 1) paperback (Sutton 2017) is available from all amazon stores, libraries and bricks and mortar bookshops e.g.https://www.amazon.co.uk/Nullius-Verba-Darwins-greatest-secret/dp/1541343964 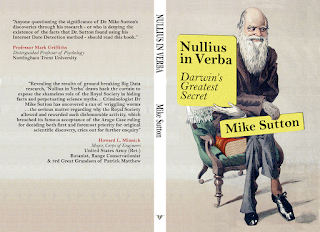 Mike Sutton
Dr Mike Sutton is the author of 'Nullius in Verba: Darwin's greatest secret'.
Dysology and Criminology: The Blog of Mike Sutton. All my opinions are my own and may not reflect those of any employer or organisation

Public Domain
Google Forces Encyclopaedia Britannica to Evolve on History of Discovery of Natural Selection
I am quite heartened to learn by private correspondence today that, following a letter from Jim Dempster's daughter - Soula Dempster - the Encyclopaedia Britannica has entirely re-written its Patrick Matthew page to reflect many of the "real facts" as opposed to the old Darwinist "false facts"- such as the old Darwinist myth that the original ideas on natural selection in Matthew's (1831) book went unread before Matthew brought them to Darwin's attention in 1860 - after Darwin (1859) had replicated them in The Origin of Species without citing their originator.
Nevertheless, at the time of writing the Encyclopaedia Britannica does, unfortunately for veracity, continue with the old debunked Darwinist "Appendix Myth   "as though it is true rather than a falsehood started as a deliberate lie by Darwin in 1860.
As early as 1842 - the year Darwin penned his first private essay on natural selection - Wallace's Sarawak paper's editor, and Darwin's Royal Society associate and friend of his father and of his great friend Jenyns - Selby cited Matthew's book many times and wrote that he could not understand why Matthew claimed, incidentally in the main body of his book not in its appendix!, that some trees could thrive in non-native areas. Matthew's explanation was an example of his original natural versus artificial selection explanatory analogy of differences, which both Darwin and Wallace replicated. Selby was like many naturalists at the time a deeply religious man who believed the Christian God placed all of his designed species in the designed place most suited to them. Matthew's accurate observations were heresy. Another naturalist, Jameson - of the East India Company - a regular correspondent of William Hooker - who was the father of Darwin's best friend Joseph Hooker - wrote in 1853 of the importance of the exact same Matthew observation on timber growing - citing Matthew. All these original New Data details - with full independently verifiable references - are in my book Nullius in Verba: Darwin's Greatest Secret   .

Click to view    the Encyclopaedia Britannica page in question.

Historically, this is an interesting and most ironic development because in my book Nullius I originally revealed    that Matthew's (1831) book was advertised on 3/4 of a prominent page of Part 5, Volume 2 of the Encyclopaedia Britannica 1842.
It is most ironic that Google technology, which I (Sutton 2014   ) originally used to show exactly who really did read and cite Matthew's (1831) book and the ideas in it on natural selection pre 1858, allows us to show the Encyclopaedia Britannica that it is wrong to claim Matthew's book and the orignal ideas in it went unread, because as early as 1832 and in 1842 this hugely influential in the 19th century encyclopaedia was citing and advertising Matthew's book.

In 2015 Dr Mike Weale discovered    an additional individual - who cited Matthew's book before Darwin and Wallace replicated the original ideas and explanations in it without citing Matthew - bringing the known total to 26, He writes:

Also here (added March 2021)
This brief citation is noteworthy for confirming that Matthew’s (1831) book was regarded as “valuable” by the author of the 1842 Encyclopaedia Britannica article on “Timber”. Note that Volume 21 really was published in 1842, unlike the other volumes which although they stated “1842” on their title pages were in reality published in earlier years. The article is signed “(B.Z.)”, identifiable as Augustin F. B. Creuze (1800-1852) via the Table of Signatures    in Volume 1. Creuze also authored other articles for the Encyclopaedia Britannica, including a lengthy one on “Ship-building” that was published as a separate treatise   , but Matthew is not cited in it. The article reproduces a table from Matthew’s book on the “number of concentric layers of sap-wood”. The citation is also noteworthy for making a reference to the “many things irrelevant to its subject” in the book. A similar opinion was expressed in the 1860 review of the book   , likely by James Brown.

The following table of the number of concentric layers of sap-wood observed in various species of timber trees is extracted from a valuable work on Naval Timber by Patrick Matthew; a work which abounds in much sound practical information, though mixed up with many things irrelevant to its subject.'