Science is a way to not get fooled


Last September, my friend and co-author of our British Society of Criminology Annual Award winning article >>NetCrime: More change in the organization of thieving   , David Mann, was in the Royal Institution on Albemarle Street, London. There he happened to bump into the famous Australian Scientist Dr Karl Kruszelnicki   .

Dr Karl, as he is popularly known, was giving a talk on all things science. David Mann, a mathematician and computer science expert, wrote a letter to me to explain what happened next:

"What a coincidence" I thought, because not only am I a huge fan of Dr Karl, but I also happened to have a copy of one of his many books with me! Not just any book you understand, but the one that contains a chapter on Sutton's famous debunking of the Popeye myth!
After an hour or so of being dazzled by Dr Karl's journey through the amazing world of science, I had a quick chat with him, and I mentioned you and he replied "Mike Sutton? Mike Sutton! I know that name!" At which point I produced the book, and luckily he had a pen to sign it with." 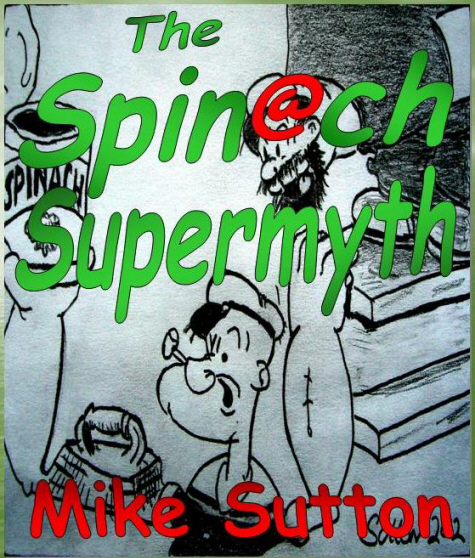 The "Popeye Myth" is classed as a supermyth - because it is a myth, created in good faith, about another myth.
Dr Karl is pictured below, with pen poised, at the signing the copy of his excellent book, "50 Shades of Grey Matter", which is being opened by David Mann. I am delighted that David Mann and Dr Karl made such a kind gesture. Dr Karl's popular science book, and David's letter, and photographs of the signing, are now treasured family possessions. I am honoured that Dr Karl dedicated an entire chapter in such a great book to the debunking of the Spinach Supermyth.
Of course, Dr Karl is right "Science is a way to not get fooled." But where supermyths are concerned it was bad science, and lack of adherence to scientific rational skepticism, that led to their creation and deep entrenchment by scientists. However, it was strict adherence to scientific principles - particularly three favourites of mine: "Nullius in Verba", "Sutton's Law" and "Follow the Data", which enabled me to debunk those myths, You can see several examples of known supermyths on my website Supermyths.com   .

The spinach supermyth is interesting, ironic and amusingly educational, but I believe the most important and the most serous Supermyth so far discovered is the Patrick Matthew Supermyth.

Mike SuttonAttribution
Page Signed for Mike Sutton: with message "Science is a way to not get fooled",
Posted by Dysology at 11:55

Email ThisBlogThis!Share to TwitterShare to FacebookShare to Pinterest
Labels: 50 Shades of Grey Matter, Dr Karl Kruszelnicke, Patrick Matthew Supermyth, Science is a way to NOT get fooled