Scotland: This Is Your Fight! End Darwin's 155 Years of Punterization of All Our People.

Not for nothing was the great Maya Angelou at the front of the audience listening to Dick Gaughan.

So as not to face their significance, people may not fully engaged with dreadful facts. The range of denial devices used by those in a ‘state of denial’ include what Cohen (2001) terms 'canny unresponsiveness', ‘psychotic negation of manifest facts’, ‘lying to convince your listeners and reinforce your own denial of the real facts’, ‘negation by wishful-thinking’ ‘evasive reassurance that the facts are not that serious’, ‘victim blaming for their predicament’, ‘withdrawal of attention – deflecting the gaze’ and ‘compartmentalization’. These various manifestations of denial relieve the recipients of dreadful facts from immediate anxiety but, paradoxically, denial’s comforts create long-term dangers, against which we must remain alert.

The world's leading evolutionary biologists admit that Matthew was first to publish the full hypothesis of macro evolution by natural selection. But scant attention has been paid to how Matthew's right to be considered an immortal great thinker and influencer in science was stolen from him by the lies, fallacies and poor scholarship of Darwin and his Darwinists. Here is a list of just some of the tactics they employed:

2. Wallace's replicating plagiarism of Matthew's original conception and unique explanatory examples in his 1855 and 1858 papers.

4. Darwin's friend, Professor David Anstead - or at the very least his anonymous editor weirdly added footnotes on his article - mockingly rubbishing Matthew in the Dublin University Magazine (January to June in 1860) effectively writing that he was an over opinionated crank who had written nothing original. The footnote can be read here. The Saturday Analyst and Leader (1860) then did the same thing.

5. In a gushing review of Darwin's Origin of Species. Charles Dickens's Magazine 'All the Year Round' (1860) quoted a paragraph of Matthew's (1831) original prose yet never cited Matthew as its source. The uncited quote is to be found here.

6. The Dundee platform blocking of Matthew at the 1867 meeting of the British Association for Advancement of Science.

8. Richard Dawkins's pseudo-scholarly history and context free typical "state of denial" victim blaming of Matthew for what Darwin and his adoring Darwinists did to him.

In addition to confirming the importance of understanding repeat victimization, their 100 per cent proven Darwinist fallacy spreading and dreadful pseudo-scholarly treatment of the facts confirms that the Dysology Hypothesis explains the Darwin Worship Industry's biased history of the discovery of natural selection:

'Letting scholars get away with publishing fallacies and myths signals to others the existence of topics where guardians of good scholarship might be less capable than elsewhere. Such dysology then serves as an allurement to poor scholars to disseminate existing myths and fallacies and to create and publish their own in these topic areas, which leads to a downward spiral of diminishing veracity on particular topics.'

The following comparison may appear odd, but I would argue no more odd than the similar ways experts in completely different areas can be so wrong about the subject of their claimed expertise in the most dissimilar of cases.

The Metropolitan Police Service officers who bungled the Colin Stagg Case, and top academic Darwinists who have bungled the history of discovery of natural selection have several key characteristics in common:
(1) Breathtaking incompetence
(2) Blinkered decision making
(3) Wholesale failure to follow evidence
(4) Justifying victimization by targeted injustice through a media process of what we might call: "obscure person weirdofication".

All four characteristics are evidenced in the materials provided about the story of Matthew Darwin and Wallace and the discovery of natural selection by clicking the supporting links to the eight numbered examples above.

Furthermore, in relation to characteristic 4, an expert psychologist and the Metropolitan Police used the media to portray Colin Stagg as an obscure personality disordered virgin loner who fits the profile of a rapist and murderer. As it turns out, he has never raped or murdered anyone in his life. Similarly, Darwin (from the 1861 third edition of the Origin of Species onward) and his Darwinists - in the press and Darwinist literature - portrayed Matthew as an obscure writer (a naturalist loner) with a delusional superiority complex who weirdly believed in meteorological catastrophic extinction events. As it turns out, Matthew was far from being an obscure writer (See Weale), Darwin's and Wallace's friend John Lindley perpetrated a proven great myth creation to rob Matthew of the fame and glory of being attributed with being first to introduce giant redwood trees into Britain, and Matthew is today proven correct by facts - as explained first by Dempster - (see also Rapino) and Darwin wrong, because meteorological extinction events most certainly happened.

Darwinists have yet to apologise for Darwin and for their own poor scholarship in punterizing us all about Patrick Matthew.

Muddle-headed biased police officers took quite a while to realise they were totally wrong about Colin Stagg. We should perhaps not feel too surprised therefore that their counterparts in the Darwin worship industry are similarly slow on the uptake of new and independently verifiable disconfiriming evidence for their own credulous and biased beliefs.


Many were convinced of Colin Stagg's guilt for a mere month or two. But "scientific" belief in the supernatural miracle of Darwin's and Wallace's dual immaculate conceptions of Matthew's prior published original hypothesis of natural selection - whilst surrounded and influenced by those who read it before they replicated it without citing Matthew, and then excused that behaviour by 100 per cent proven lying that none had read Matthew's original ideas before they replicated them - is over a century and a half old. And, amongst others who have been spreading the myth of Darwin, Wallace and Matthew, the Royal Society has been happily awarding Darwin medals to those who gladly parrot its namesake's proven, self-serving, glory stealing, lies as the gospel truth about Matthew.

Were they to see and admit to the truth about the obvious and significant newly discovered facts in their field, Darwinists have far more than the the Metropolitan Police Service ever had to lose for doing so in theirs. This is because Darwinisits have a proud 155 year old tradition of credulous pseudo-scholarly Darwin worship and prolific output in "scholarly" publications on the topic. Consequently, we should perhaps expect it to take several years, therefore, for the new evidence to sink into the brains of Darwin scholars.

Who knows, it may never sink in. Perhaps they will simply form the Church of the Immaculate Conception of a Prior Published Theory? 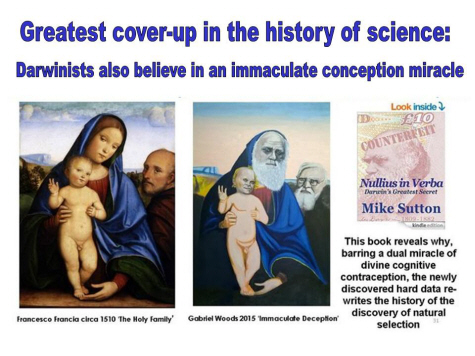