In this newly unearthed publication 'Testimonials in favour of W.L. Lindsay ... as a candidate for the office of Conservator of the museum of the Royal College of Surgeons, Edinburgh (1852)' we find Patrick Matthew being asked to vouch for the abilities, character and suitability of the well known naturalist Lauder Lindsay for a senior appointment. Interestingly, Darwin would later cite Lauder Lindsay in his book The Descent of Man. Along with Matthew's testimonial we find further testimonials from naturalists. One is the famous uncle of a naturalist who cited Matthew's book (among over 25 others to cite it pre-1858) before Darwin (1858, 1859) replicated Matthew's discovery, claimed it as his own and then lied (see Sutton 2014 and Sutton 2015) that no naturalist / no one whatsoever had read Matthew's original ideas before Darwin's and Wallace's (1858) supposed independent conceptions and replications of Matthew's ideas, unique terminology and explanatory examples and idiosyncratic analogies.

Most importantly, in this book, Matthew spells out that he is the Author of: 'On Naval Timber and Arboriculture'
The relevant text is on page 18 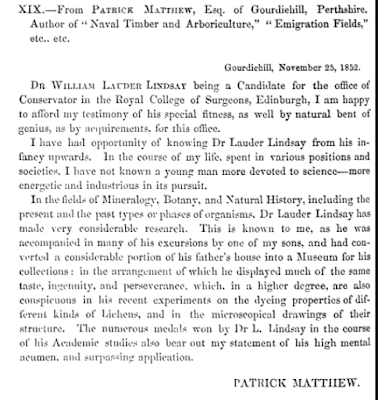 The celebrated naturalist in question is Robert Jameson, whose (it is newly known Sutton 2014) nephew - William Jameson  - cited Matthew's book in 1853, which is a year after Matthew appears in print in this book of testimonials with hs famous uncle.

William Jameson cited Matthew to point out Matthew's (1831) unique observation that some tree species could thrive even better in areas that were not their natural habitat. This was just one of Matthew's heretical points, which provided disconfirming evidence for the then orthodoxy in science that the Christian "God" put all species in a predestined place that was best and perfectly suited to them and the needs of all humans.  Most notably, Robert Jameson was famously Charles Darwin's tutor at Edinburgh University. Robert Jameson believed in evolution and is widely considered to be the anonymous author of the Edinburgh New Philosophical Journal article of 1826 that contains the first known English usage of the word "evolved" in the context of organic evolution.

In 1831, citing himself as the author of the book On Naval Timber and Arboriculture (that we know both Matthew, Darwin and Wallace and others since fully admitted contains the first complete theory of macroevolution by natural selection - see Sutton 2015 for the citations to this fact recorded in the historic publication record), Professor Robert Jameson published Matthew's paper on meteorology (here - see image below). Clearly, Jameson would most surely have been fully aware of who Matthew was and of his dangerously heretical work - which had been noted in reviews as such (see Sutton 2014, 2017). On heretical ideas of evolution Jameson, we know - if it was he - would write only anonymously (see Jenkins 2015), as did the best seller author of "The Vestiges of Creation" the naturalist geologist and publisher  Robert Chambers (a correspondent and acquaintance of Darwin and Wallace's' greatest influencer) - who we do know for sure, but only due to my original research (e.g. Sutton, 2014, 2015, and 2017), also cited Matthew's 1831 book long before 1858.

Matthew's newly discovered (on 12 Jan 2019) juxtaposition and citation of his book in a publication co-contributed to by Professor Robert Jameson is the second I have uniquely unearthed where this occurs. Both examples explain why Robert Jameson's naturalist nephew William cited Matthew's original ideas. Moreover, it is powerful circumstantial evidence that Professor Robert Jameson also read and understood Matthew's theory long before Darwin and Wallace stole it and claimed it as their own on the dishonest and totally wrong grounds that no naturalist / no one at all had read and understood Matthew's (1831) prior-published complete theory.

Perhaps Robert Jameson is the eminent naturalist who - as Matthew (1860) patiently explained to the proven lair Darwin -  understood Matthew's bombshell conception and original ideas - yet would not teach nor otherwise share them for fear of pillory punishment?


Above all else, the unearthing of the fact that both heretical evolutionist Professor Robert Jameson and  his nephew, the botanist William Jameson knew of Matthew and were aware of his work On Naval Timber is confirmation for the concept of knowledge contamination and its applicability in the story of Darwin's and Wallace's plagiarizing replication of Matthew's theory of evolution by natural selection from that book. This is because pre-1858 Matthew twice appeared in print citing himself as the author of On Naval Timber in works edited by and also contributed to by Robert Jameson  (who was, incidentally, Darwin's tutor at Edinburgh University), whose nephew, William Jameson, was a regular correspondent of William Hooker, who was in turn an associate of Charles Darwin, Wallace's mentor and guarantor and father of Darwin's best friend, evolutionary confidant and botanical motor Joseph Hooker. If knowledge contamination is not relevant then anyone claiming so perhaps believes no amount of what might be seen as improbable and closely linked multiple coincidences ever sum to a likelihood that they are not actually coincidental at all? By way of example: Are we to believe that the fact Robert Jameson edited the journal containing an article by Matthew, in which Matthew cited his own 1831 book and where an advert for that book made the subject matter of species and varieties in it plain and clear, and that Matthew appeared in an academic testimonial with Robert Jameson, where Matthew again cited his book has nothing at all to do with the fact William Jameson then cited Matthew's book and mentioned one of Matthew's important observations that supported Matthew's original theory of evolution by natural selection? 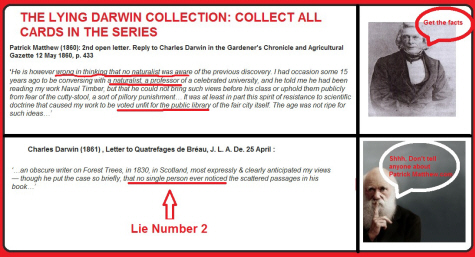 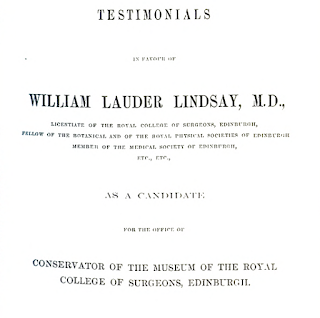 Advertisements for Robert Jameson's books were published in the Edinburgh Literary journal along with those for Matthew's Naval Timber. The fact Matthew's book was about species and varities and their location in nature was made very clear indeed (see the example of one advert below in the same publication of 1830, here is one for Jameson. And here, some commentary on one of his publications. 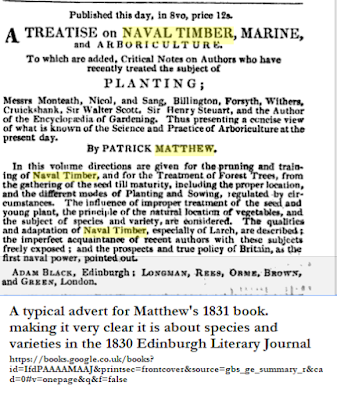 Note: There was a second (1854) copy of the testimonials as well. It's here

Note: At the 1867 Dundee meeting of the British Association for the Advancement of Science (where Matthew was platform blocked from speaking on his original discoveries) both he and Lauder Lindsay presented papers on other topics - see here.

Note Lauder Lindsay in 1855 citing assistance from who is most probably Patrick Matthew's son, who farmed in Germany here

Note: In 1861 he was elected a member of the Royal Society of Edinburgh and, earlier, in 1858, Lindsay was elected a fellow of the Linnean Society (Darwin was a member and it was the society that published Darwin's and Wallace's plagiarizing joint article in 1858)  More here.

Postscript 30. 01. 2019
See a more recent post with further observations on the links between Matthew and Robert Jameson