Google Scholar: always there to remind you that (if you do) you have an international reputation Alerted me today to piece citing my research on stolen goods. A short leap from that to research on science fraud by plagiarism and the market for stolen ideas https://t.co/0m9F9cPFD1
— Dr Mike Sutton (@Criminotweet) June 2, 2018


On December 6th 2018, will be giving a talk to Teesside Skeptics on the problem of the market for stolen ideas and how it motivates plagiarism. The presentation will focus upon the apparent general reluctance of the scientific "establishment" to admit proven mistakes in wrongful attribution of priority to its beloved science heroes.

I will be unleashing a no holds barred humorous and entertaining merciless expose analysis of fully evidenced case study material of various desperate and malicious attempts made by members of the scientific community and others to silence me for having the temerity to use disruptive Big Data technology to originally unearth the fact that, as opposed to the old beloved science myth of none, the book containing Patrick Matthew's (1831) prior published origination of macroevolution by natural selection was cited by naturalists. Among them, four were at  the pre-1858 epicentre of influence upon Darwin and Wallace, before they replicated it, called it their own and Darwin deliberately lied by claiming alternately that no naturalist/no single person had ever read Matthew's bombshell breakthrough before he and Wallace supposedly independently conceived so much of it. Event details here 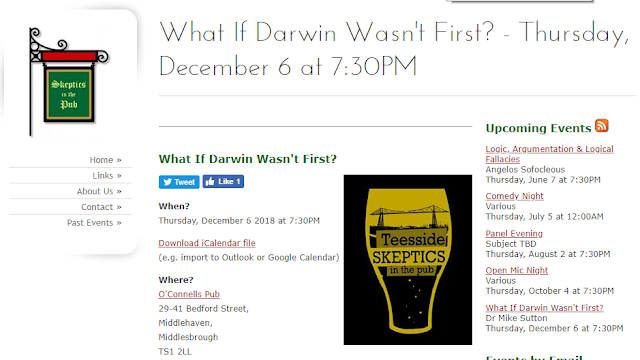 Further expert peer reviewed academic journal reading for anyone wishing to know what - that most amusingly has so upset some fact-denial abusive pseudo scholars - exactly, has been newly discovered, and how my despicable original unearthing discoveries were made:

This is what a plagiarizer or other science fraudster might do when they have been caught out. It's known as the @JohnCleese "John Cleese Manavure"https://t.co/Rkqjz2O28A