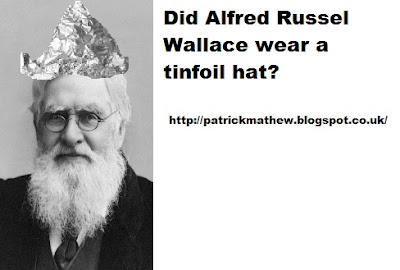 In the UK, some weeks after the Scottish Daily Mail reported on the presentation of my Bombshell News of Darwin's and Wallace's great science fraud at the Edinburgh Skeptics in the Pub event on the Fringe of the Edinburgh International Science Festival, The Daily Telegraph exposed the 2014 discovery of Darwin’s and Wallace’s great science fraud in greater detail (The Daily Telegraph, 2014, May 28th, p.12) :

“Darwin ‘stole’ theory of natural selection”
Charles Darwin lifted his theory of natural selection from a book by a Scottish fruit farmer, a researcher has claimed.
Decades before ‘On the Origin of Species’ appeared in 1859, Patrick Matthew wrote of “the natural process of selection”, explaining how “a law universal in nature” ensured the survival of the fittest.
Darwin, although accepting that Matthew “anticipated” the theory, always denied plagiarism, maintaining that he arrived at the theory independently.
But Dr Mike Sutton, a criminology expert at Nottingham Trent University, believes that Darwin must not only have been aware of Matthew’s 1831 work, On Naval Timber and Arboriculture, but borrowed from it heavily.
He has spent years cross-referencing passages in both books, checking citations and studying the figures and studying the figures who influenced both men [Note: that last bit is not actually accurate, because I fully completed the entire project and wrote it up as a draft book manuscript inside one year], and claims to have unearthed information which proves the naturalist lied.
“I have no doubt, based on the weight of new evidence, that Darwin read Matthew’s book and then went on to replicate his discovery and key themes.” Dr Sutton said: “Without Patrick Matthew, The Origin of Species would never have been written.”

The Daily Telegraph’s Science Correspondent, Saraha Knapton, who following a telephone conversation with me a few weeks ago, asked for and received the draft copy of my forthcoming book ‘Nullius in verba: Darwin’s greatest secret’ took the story forward on May 28th in her Daily Telegraph science blog.

In Knapton's blog is to be found, in my opinion, the Semmelweis-Reflex response of Darwin “expert” Professor James Moore of the Open University. At least according to the information relayed in Telegraph blog, Moore, is apparently completely unaware of the wealth of science literature (e.g. Dawkins 2010) that fully accepts Matthew is the only author to have first fully discovered and fully articulated the theory of natural selection. In apparent absence of such knowledge, Moore, is quoted as saying that 'thousands of people were coming to the same understanding’. If The Daily Telegraph is quoting Moore accurately, then we really need to see Moore’s bibliography to prove it because that fantastical information is not yet in the public domain. Anyway, on the basis of his un-evidenced claim, Moore, apparently not having bothered with the scholarly chore of examining the detailed and fully referenced brand newly discovered evidence I have published in the public domain (Sutton 2014) , displays what might be the onset of an embarrassing Semmelwies Reflex. The Semelweis Reflex sufferer, allegedly, blurted “I would be extremely surprised if there was any new evidence had not been already seen and interpreted in the opposite way.’
I suspect Professor James Moore and other Darwinists would be extremely surprised if only they looked at the evidence. On which note, the response to the news in the comments to The Daily Telegraph science blog are most fascinating for anyone interested in studying cognitive dissonance and the apocryphal knee-jerk rejecting Semmelweis Reflex. On this blog you can even find a staunch anti-creationist computer scientist desperately resorting to Rupert Sheldrake's pseudo-scientific morphic resonance woo-woo to seek to explain away Darwin's and Wallace's obvious plagiarism.

Among all those comments on the Daily Telegraph's official science blog, if you care to look, you will find that I asked a leading Alfred Wallace expert at the British Museum of Natural History, Dr George Beccaloni,    why he does not accept my proposition that Wallace cannot now be said to have independently discovered natural selection after it is newly discovered that Wallace’s Sarawak paper editor and publisher (Selby) had earlier read and cited Matthew’s book many times, and that Wallace’s greatest published influencer, Robert Chambers, had also cited Matthew’s book before going on to pen the influential Vestiges of Creation. Remembering folks – that’s two out of only seven naturalists who are currently known to have cited Matthew’s book – who clearly influenced and facilitated Wallace’s pre-1858 work on organic evolution and natural selection. In response to that question, Beccaloni writes his considered reply, given for the historical record:

‘I think your book is likely to 'score an own goal', by showing that 7 naturalists read Matthew's book yet failed to grasp his idea of 'natural selection'. Yes, I do think that Matthew probably DID propose the idea of natural selection as a mechanism of evolutionary change, the problem is that he did not explain it at all clearly or present it as being a new theory - which is indeed probably why those 7 naturalists (and others) missed it. Darwin and Wallace deserve the credit for explaining it sufficiently well to convince others of its importance. Note that Darwin, unlike Wallace, also accepted Lamarckism - something that always bothered Wallace who vigorously rejected Lamarckism in his 1858 paper and in his subsequent writings. It would make a very interesting study to examine the two men's attitudes to Lamarckism...’